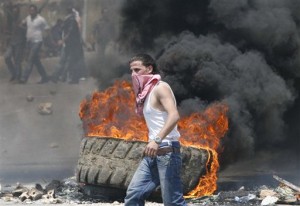 Future Movement deputy head Antoine Andraos told Akhbar al-Youm news agency on Wednesday in response to a comment earlier in the day by Hezbollah MP Mohammad Raad, that “Lebanon is not under US tutelage but is, in fact, under the tutelage of Hezbollah’s weapons , no more and no less,”

“Hezbollah is the one that goes into the street and enters people’s houses, not America or France,” Andraos said.

If Hezbollah members are accused of involvement in former Prime Minister Rafik Hariri’s 2005 assassination, “they should defend themselves before the Special Tribunal for Lebanon (STL) and not on the television screens,” he added.

Earlier on Wednesday, Hezbollah MP Mohammad Raad held a press conference in which he said that the STL serves foreign agendas and has increased tension and divisions among the Lebanese.

Raad also said the Special Tribunal for Lebanon is a violation of the Lebanese Constitution .