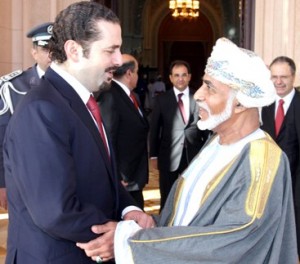 He was received on his arrival at the Royal Airport by Syed Fahd Bin Mahmoud Al Syed, Deputy Prime Minister for Cabinet Affairs, a number of ministers, ambassadors of the Gulf Cooperation Council, and senior military personnel.

in several sectors, including agriculture, education, economy, tourism and all the issues that interest both countries .

Hariri stressed the importance of the historic relations between the two countries. He said that His Majesty Sultan Qaboos stood by Lebanon during all the difficult periods that Lebanon

Hariri told reporters that he and Sultan Qabous discussed the challenges that are facing the region in general and Lebanon in particular adding that they also discussed the Arab Peace Initiative, all the regional and bilateral issues.”