Analysis: Lebanon in a Quandary

by yalibnan
740
The Special Tribunal for Lebanon ( STL) is widely expected to implicate senior members of the Shiite militant group Hezbollah in the killing of the late Lebanese PM Rafik Hariri
Share: 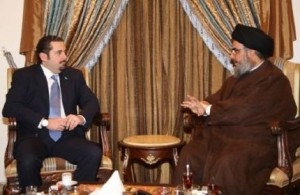 As the UN-backed Special Tribunal for Lebanon (STL), dealing with the assassination of former Prime Minister Rafic Hariri in 2005, prepares to issue its first indictments, a prestigious think-tank is pleading for an intra-Lebanese deal, which it considers necessary to avoid a breakdown of the country’s precarious balance of power.

The tribunal is widely expected to implicate senior members of the Shiite militant group Hezbollah in the killing. The movement has promised swift reaction should the government, now led by the victim’s son, Saad Hariri, not dissociate itself from the tribunal.

The report titled ‘Trial by Fire: The Politics of the Special Tribunal for Lebanon’ recommends a compromise that places the indictments in the public domain; preserves Hariri’s credibility without provoking Hizbollah; and perpetuates the 2008 truce negotiated in Doha.

“Any realistic way out would cost everyone something while preserving what is essential,” says Peter Harling, Crisis Group’s Iraq, Syria and Lebanon Project Director. “Banking on Hizbollah’s tameness or Hariri’s capitulation will only encourage the two sides to stick to uncompromising positions that could push Lebanon to the brink.”

The Brussels-based Crisis Group, headed by Louise Arbour who served as United Nations High Commissioner for Human Rights from 2004 to 2008, emphasizes: “What is necessary is to ensure the Lebanese people do not emerge as the biggest losers of all.” At the same time it cautions that although taking dramatic steps would hurt its reputation, Hizbollah, having warned of catastrophe, can ill afford to do nothing.

“If the prime minister complies, he and his partisans would suffer a devastating political blow. If he does not, consequences for them and the country could be more ruinous still. If Hizbollah does not live up to its threats, it will lose face. If it does, its image as a resistance movement may be further sullied.”

“There are no good options,” adds the Crisis Group, “but the best of bad ones is to find an inter-Lebanese compromise that, by distancing Lebanon somewhat from the STL, preserves the country’s balance of power without wholly undermining the work the tribunal has done so far.”

Saudi Arabia and Syria reportedly are working on such a scheme. The Crisis Group thinks it would be prudent for others to support such efforts and suggest their own ideas. The alternative is to either wake up to a solution they dislike or try to upset the only credible chance for a peaceful outcome,” the Crisis Group’s report points out.

The UN-backed tribunal was the product of political considerations that continue to shape perceptions in Lebanon and beyond.

In fact, Hizbollah and its allies have embarked on a relentless campaign to discredit the tribunal. Although indictments of movement members will resonate positively among many, they will be viewed by its numerous sympathisers — who will point to the long list of political assassinations in Lebanon and the region for which there has been no investigation, let alone accountability — as a purely political act.

The Crisis Group is of the view that for lack of other mediation efforts, the best hope for a soft landing currently lies with a Saudi-Syrian initiative. “A more authentically Lebanese formula, hammered out by the opposing camps, arguably would be healthier and more sustainable but is almost entirely out of reach given relations between the two sides and their respective strong reliance on Riyadh and Damascus.”

Details on a possible deal remain murky, but the Crisis Group considers several scenarios possible: Firstly, Lebanon could request the UN Security Council to halt STL activities once indictments have been issued, for the sake of domestic stability.

Seondly, it could condition further cooperation with the tribunal on its taking certain steps — for example, foregoing the option of trials in absentia; agreeing to look into Hizbollah’s “false witnesses” claim or Israeli spy-ring affairs.

Thirdly, cooperation could continue even as Lebanon expressed serious doubts as to the basis of the STL’s findings. However, a compromise should be accompanied by a collective agreement to allow the prime minister to govern more effectively — something he systematically has been prevented from doing.

The present situation is underlined by the fact that Hizbollah’s reputation has already been tarnished. According to the Crisis Group, Hizbollah’s domestic detractors are once more showing their fecklessness and the huge imbalance of power from which they suffer on the ground. Neither side will easily remedy these facts of political life. Nor will the tribunal achieve the loftier goals many projected onto it.

“No winner will come out of the current battle,” says Robert Malley, Crisis Group’s Middle East and North Africa Program Director. “What is necessary is to ensure the Lebanese people do not emerge as the biggest losers of all.”

Going into detail, the Trial by Fire report points out that from its very inception, the international investigation STL was promoted by an assortment of Lebanese and non-Lebanese players pursuing a variety of goals.

Some sought revenge and accountability, others to deter future political assassinations and bolster Lebanon’s sovereignty. A few — notably France and the U.S. — saw an opportunity to promote a lasting political realignment in Beirut by strengthening a pro-Western alliance, dramatically lessen Syria’s and its allies’ influence there or even — a goal nurtured more in Washington than in Paris — destabilise the Syrian regime.

There was, too, hope of a breakthrough in the Arab world for international justice principles and an end to the culture of impunity. The result was a remarkably wide consensus among actors who converged on a narrowly defined judicial process, resting on the assumption that Syria was guilty, and that its guilt could and would be established beyond doubt.

The report says: To invest such high expectations in the investigation was both slightly unfair and exceedingly optimistic. They rested on a series of misjudgements — about the effective balance of power in Lebanon; about Syria’s ability to withstand pressure and isolation; and about the probe’s capacity to deter future assassinations, which continued unabated.

Nor did the international inquiry’s promoters appear to fully take account of the time lag between their hurried political objectives and the tribunal’s far slower pace.

In the years between Hariri’s assassination and the moment the tribunal came to life, the Lebanese and regional contexts underwent a dramatic change. Syria withdrew from Lebanon and, far from being ostracised, was being courted again, notably by France but also, to a lesser degree, the U.S.

The 2006 war plainly established Hizbollah’s military potential, deepened Lebanon’s internal rifts and damaged the West’s Arab allies. Hizbollah’s brief May 2008 takeover of Beirut, followed by the Doha accord between duelling Lebanese camps, ratified a new domestic balance of power, ushered in a national unity government and hastened the fragmentation of the pro-Western, anti-Syrian coalition led by Saad Hariri, known as March 14. Following Saudi Arabia’s footsteps, Hariri himself achieved a measure of reconciliation with Damascus.

Something else changed in the intervening period — the identity of the presumed culprit. As recent media leaks suggest and as Hizbollah’s own statements confirm, operatives belonging to the Shiite movement are now widely anticipated to be the first indictees.

For March 14, the STL once more turned into a precious instrument in the domestic confrontation and, for its foreign backers, a tool with which to curb the Shiite movement. For Hizbollah, the tribunal became a matter of life-and-death, seen as another in its foes’ serial attempts to defeat it: accusations accepted as legitimate in Lebanon and the region could seriously damage its reputation, liken it to a mere (albeit powerful) sectarian militia, revive perilous sectarian tensions and rekindle efforts to disarm it.

As a result, Hizbollah and its allies started an intensive, relentless campaign to discredit the tribunal and intimidate those who might support it. Aided by some of the probe’s initial missteps, the Shiite movement successfully polarised and politicised the situation so that, even before indictments have been handed down, public opinion in Lebanon and the Arab world already has made up its mind.

Nothing good can come of this. Some within March 14 and its backers believe the Shiite movement is bluffing, that it cannot afford to provoke a confrontation lest it bolster the very image of itself as a sectarian militia it fears the indictments will promote.

Hizbollah and its supporters seem to think, conversely, that Hariri will cave in to pressure, cut all ties to the STL and denounce its allegedly political agenda. Both scenarios are theoretically plausible, neither is likely. The Shiite movement, having warned of catastrophe, can ill afford to do nothing; Hariri, having taken the helm of the Sunni community, would pay a heavy price for turning his back on the murder of the man who was both his father and that community’s pre-eminent leader.

Banking on Hizbollah’s tameness or Hariri’s capitulation will only encourage the two sides to stick to uncompromising positions that could push Lebanon to the brink, warns the report.