March 14 MP Ahmad Fatfat is puzzled about the action of Interior Minister Ziad Baroud actions against Internal Security Forces (ISF) General Director Achraf Rifi at a time when “we were waiting for Baroud to congratulate the ISF for its achievements in uncovering networks of Israeli collaborators.”

“We were also waiting for Baroud to personally defend the ISF against the smear campaigns by Free Patriotic Movement MPs ,” he added according to the National News Agency (NNA). 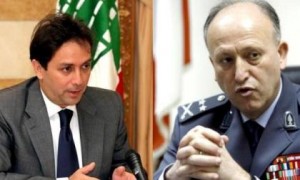 According to the National News Agency (NNA) on Friday, Baroud said that Rifi’s statement violated the law.

Baroud said that he was the only person authorized to respond to an MP’s inquiry.

“I am the only person authorized to respond to a question by an MP,” he said

Karam, a Free Patriotic Movement official, was arrested by the ISF – Information Branch in August on suspicion of collaborating with Israel.

In Tripoli a large number of cars roamed the streets Friday evening in support of Rifi . Many of the cars carried posters of General Rifi and were fitted with loudspeakers that called for supporting Rifi’s position