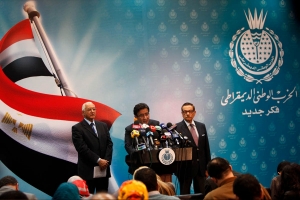 With the results of Sunday’s parliamentary elections in Egypt, the regime of President Hosni Mubarak sent a powerful message that it will brook no dissent as the country moves toward a potential presidential transition as early as next year. By sweeping almost all the seats, Mubarak’s National Democratic Party paved the way for the octogenarian to secure yet another term as head of state—or perhaps install his son, Gamal, as president.

But while the results may strengthen America’s strongest ally in the region in the short term, the regime’s ongoing heavy-handed tactics and supine parliament could eventually undermine its grip on power. The government’s purported embrace of democracy—even as it continues to shore up its own power—is likely to be further exposed as a ruse, with returns giving the NDP 209 of 221 seats and the country’s two main opposition groups, citing widespread fraud, pulling out of the next round.

“The opposition withdrawal will deprive these elections of whatever shred of legitimacy they had,” Michele Dunne, a senior associate at the Carnegie Endowment for International Peace, told NEWSWEEK. “This election will feed the growing tendency of the opposition to refuse to participate in a political game they see as unfair and will feed tendencies to call for wholesale changes in the system.”

According to Egypt’s High Election Commission, the country’s largest opposition group, the Muslim Brotherhood, won no seats in the first round of voting, not exactly a surprise to the group. The Brotherhood, an Islamist movement that’s officially banned, holds 20 percent of seats in the current People’s Assembly, the lower house of Parliament. International and domestic rights groups slammed the elections for mass rigging, procedural violations, voter intimidation, and scattered violence, and said they were far worse than the last vote in 2005. Amnesty International reported at least eight people were killed.

The regime, however, congratulated itself on a job well done. “The elections as a whole were conducted properly and the results announced earlier reflected the will of the Egyptian electorate,” commission spokesman Sameh al-Kashef said in a statement.

But the Brotherhood, whose slate runs as independents, has announced that its remaining 26 candidates will not stand in a Dec. 5 run-off, required for districts where no candidate received an absolute majority. Egypt’s second-largest party, the secular Wafd, stated that it also is withdrawing. Wafd won two seats outright in the first round, according to the Associated Press—the commission has yet to announce official tallies—and holds a handful of seats in the current Assembly.

Even without the near landslide, Mubarak has had a compliant legislature, currently dominated by the NDP, that should position him well in the run-up to presidential elections scheduled for September 2011. “It sets the stage for a façade presidential election between whoever the NDP candidate might be—the father or the son—and a few candidates who are supposedly opposition,” says Samer Shehata, assistant professor of Arab politics at Georgetown University.

Mubarak, 82, has ruled Egypt with an iron fist—under a state of emergency decreed after the assassination of Anwar Sadat in 1981—for almost three decades. He has not yet confirmed that he will run for a sixth term. The ailing leader is rumored to be setting the stage for his son, who also is unpopular, to succeed him.

Over the years, the country has become ever more disillusioned with politics. “Egyptians, if anything, are further convinced of the fact that elections are neither free nor fair and the regime doesn’t give a damn about voting or about any of these things that are supposedly important to democracy,” says Shehata, who was in the northern port city of Alexandria on Election Day. The government has relied on coercion to keep power and maintain stability, but analysts say that is not sustainable. “That works, but will it work forever?” asks Steven Cook, a senior fellow at the Council on Foreign Relations, who sees repression as a “feedback loop” for citizen fury. “The regime takes ever-stronger measures against potential sources of instability, which only increases the possibilities of instability.”

And Egypt does not lack for potential flash points: simmering sectarian tensions, rising food prices, growing economic disparity, a media crackdown, and a citizenry increasingly fed up with police brutality. “Those are the kinds of issues that have the potential to mobilize dissent on a much larger scale. And then if you have a political leadership in place in the presidency and in the Parliament that’s not considered to really enjoy legal and constitutional legitimacy, I think that’s just another risk factor in the situation,” says Dunne.

The official turnout for Sunday’s election was purported to be 35 percent, 10 percent higher than in 2005. But around Cairo, voting booths were nearly empty, and local groups estimated the turnout at about 10 percent. “They [Egyptians] are sure that nothing will change, so why would they even spend five minutes voting?” said Bahey el Din Hassan, director of the Cairo Institute for Human Rights Studies. “It has become very risky to participate in public elections.” Indeed, Egyptian elections have become notorious for the presence of gangs of beefy young men who intimidate voters at polling stations. “I never vote because of the thugs; they scare me. You have to hire your own thugs if you want to vote,” said Mohamed Metwalli, a poet and journalist.

The U.S. State Department issued a statement Monday voicing “dismay” and “disappointment” about the elections. But the comments rang hollow in light of the latest WikiLeaks revelations, which show the degree to which Washington does business with, and even props up, undemocratic Middle East regimes, including Mubarak’s. The published cables highlight America’s reliance on Egypt as a sounding board and partner on regional issues, from Iraq to Israel. That relationship suggests the U.S. is not necessarily prepared to ramp up pressure on Mubarak to increase democracy.

For now, the regime’s tactics are unlikely to bring many people into the streets—although small riots around the country did break out Monday. “With each unhappy encounter with the state, people who would be willing to work within the established rules of the game decide they have no option,” says Cook. He noted that in the 1990s Islamic insurgency groups capitalized on anger against the government to stage terrorist attacks. “You can beat the Muslim Brotherhood up and they’ll continue to stand, [but] you’ll have offshoots of the Brotherhood potentially who’ll want to shoot back.”

The biggest fear now is a deepening of disaffection in a country that has already seen protest over wages, food prices, and police brutality. In a volatile region where conflict is always latent, anything can happen. “Egyptians’ expectations are rising, and they’re less willing to accept what they accepted in the past,” says Dunne. “I’m just not sure it’s going to work on a long-term basis for the Egyptian regime to continue to play by the old rules of vote rigging and exclusion of the opposition.”