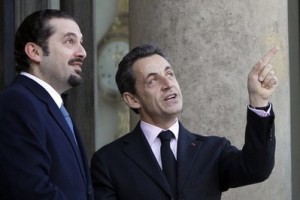 Hariri’s three-day official visit to Paris is seen as the most significant step in international efforts aimed at moving Lebanon away from its crisis.

“The French leadership will inform PM Hariri that it stands by him and his government,” French diplomatic sources told al-Mustaqbal newspaper.

It will also ask Hariri if there is anything France can do , the sources said.

Hariri’s trip to Paris is aimed at receiving French support for Lebanese sovereignty according to French diplomatic sources . The sources told An Nahar that Hariri’s meeting with Sarkozy will be an occasion to reiterate French commitment to Lebanon’s sovereignty, independence and state institutions.

During his stay in Paris, Hariri will also hold talks with his French counterpart Francois Fillon and Foreign Minister Michele Alliot-Marie.

Hariri ended yesterday a 3 day official visit to Tehran during which he met with all the top Iranian leaders including its supreme leader, president , first vice president , speaker , defense minister and several other key officials. Iran offered Hariri to arm the Lebanese military in addition to Hezbollah

Sarkozy will reportedly stress to Hariri the need to revive the national dialogue under President Michel Suleiman, to strengthen the national unity according to local reports .

Prime Minister Saad Hariri on Tuesday emphasized the importance of dialogue to resolving political tensions in Lebanon and said that France supports Lebanon’s stability and the Special Tribunal for Lebanon (STL).

Update: Speaking to reporters after meeting with French President Nicolas Sarkozy in Paris, Hariri said that “Iran is a friendly state to Lebanon” and plays an “important role.”

The PM denied media reports that he told US officials that he supported a strike against Iran.

He said his visit to Iran, which finished on Monday, was an affirmation of the importance of continual Lebanese-Iranian communication.

The New York Times on Sunday cited a US State Department cable released by WikiLeaks as saying that Hariri told US officials in 2006 that “Iraq was unnecessary,” while “Iran is necessary.” The PM also reportedly said that US officials “must be willing to go all the way” to stop Iran’s nuclear program.

According to LBC sources Paris expressed to Hariri during France’s support for state institutions and for him in person d an informed the premier about its ongoing efforts to spare Lebanon any divides or security disturbances.

MTV reported that the meeting between Sarkozy and Hariri tackled the latter’s visit to Tehran , its importance and outcome.