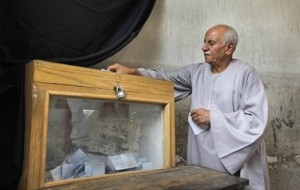 Egyptians voted Sunday in a parliamentary election that was marred by a crackdown on the main opposition movement and on independent media, as well as tensions with the United States over the government’s insistence on barring international monitors.

In the run-up to the vote, at least 1,200 supporters of the Islamic fundamentalist Muslim Brotherhood were arrested in one of the most sweeping crackdowns to silence critics since President Hosni Mubarak came to power nearly 30 years ago. On Sunday, independent local monitors were barred from entering many polling stations visited by The Associated Press.

The tough measures suggest the autocratic leadership of this close U.S. ally wants to guarantee its firm grip on power at a time of uncertainty. Egypt is heading into presidential elections next year, but there are questions over the health of 82-year-old President Hosni Mubarak, who underwent gallbladder surgery earlier this year.

At the same time, Egyptians the past year have grown increasingly vocal in their anger over high prices, low wages, persistent unemployment and poor services despite economic growth that has fueled a boom for the upper classes.

The ruling National Democratic Party appeared determined to restore its unquestioned monopoly over the new, 508-seat parliament. That hold was weakened in the last election, in 2005, when the Muslim Brotherhood surprised everyone by winning a fifth of the legislature, its strongest showing ever.

The 2005 vote was marred by widespread rigging, according to rights groups, and violence that killed 14 people, in most cases when mobs rioted trying to get into polling stations closed by police to keep out opposition voters. Many observers feared the same this year.

“The security is running the show,” said Hosny Ragab, a 60-year-old monitor, who told AP he was ordered out of a polling center at al-Raml in the Mediterranean coastal city of Alexandria. “I showed them my election commission accreditation, but they insisted that I leave.”

Outside the station there was an ominous standoff between supporters of the ruling party candidate — cabinet minister Abdel-Salam Mahgoub — and of his Muslim Brotherhood rival Sobhy Saleh, who chanted and taunted each other. At one point, busloads of women were brought in and were ushered into the polling station, told by their escorts to vote for Mahgoub. Several of the women told AP they were being paid around $7 each to vote for him. Speaking outside the station to the AP, Mahgoub denied any irregularities.

There were scattered reports of violence. In the southern city of Qena, supporters of the local Brotherhood candidate threw firebombs at police after they were barred from a polling station, police said.

The Brotherhood’s main website, Ikhwanonline, was blocked to users inside Egypt on Sunday, said Abdel-Gelil el-Sharnoubi, who runs the site, though several other Brotherhood-affiliated websites remained accessible.

“The regime is using a 1940’s censorship mentality and decided to bury its head in the sand,” he told AP. “The regime does not tolerate other opinions or open a window for others to say something which it does not believe in.”

The ruling party always enjoys large majorities in parliament. But Egypt’s leadership appears to want to ensure a complete hold, squeezing out any rival power centers that could provide a platform for dissent as the country enters a particularly touchy period surrounding next year’s presidential election.

Mubarak, who has ruled Egypt since 1981, has not said whether he intends to run for another, six-year term, though senior figures in his National Democratic Party insist he will be their candidate. But even if he does, a new term would take him nearly to the age of 90, raising questions whether he would complete it.

The president is widely thought to be grooming his son Gamal to succeed him. But the 46-year-old investment banker-turned-senior party leader faces some opposition within the party and there is widespread resistance to “inheritance” of power among the public.

Anti-Gamal sentiment has shown up at persistent street protests over economic hardships. Though the economy is growing at a healthy pace of more than 5 percent annually, that prosperity is not trickling down or meeting the needs of a population growing by some 2 percent annually.

About 40 percent of Egypt’s 80 million people live below or close to the poverty line, surviving on about $2 a day, according to the World Bank.

Egypt has 41 million registered voters, but turnout has traditionally been very low — around 25 percent in 2005. Secular opposition parties are weak, with little public support and limited resources.

Ahead of Sunday’s vote, Egypt rejected U.S. calls to allow foreign monitors to observe the election, accusing its ally of trying to play the role of “overseer.”

Egypt argued there were enough local monitors to do the job. But civil society groups say that out of hundreds of activists who applied, the election committee authorized only dozens to monitor — and it appeared Sunday that even some of those with papers were being turned away.

Without independent monitors inside the polling stations, the only hedge against any fraud is the government-run election committee, activists warn. Under constitutional changes passed in 2007, independent judges who used to watch voting at each station have been removed.

Witnesses said there was harassment of opposition supporters and violations of a ban on campaigning since Friday night.

In the Cairo suburb of Nasr City, supporters of NDP candidate and Oil Minister Sameh Fahmi, played music outside polling stations Sunday. The previous night, an NDP candidate, millionaire businessman Mohammed Abul-Einein, sent a convoy of pickup trucks laden with his supporters roaming the streets of the suburb of Giza, with music blaring from loudspeakers. Many of the supporters, all fighting age males, carried clubs.

The son of an independent candidate in the Cairo district of Matariya was stabbed to death late Saturday, but his family and friends said it was from a personal dispute unrelated to the election.

In the impoverished northern Cairo district of Shubra el-Kheima, a supporter of the local Brotherhood candidate bemoaned that representatives of candidates had been ejected from the polling station.

“The state security people at the polling stations are stopping whom they want and letting in whom they want,” said the supporters. Said Draweesh.

Meanwhile, fellow resident Ali Saad was casting his vote for the NDP candidate, proclaiming, “He is one of us.”

Still, Saad added, “none of them would be able to solve our problems here.” AP

Photo: An Egyptian man casts his vote in the parliamentary elections at a polling station in the Shubra neighborhood of Cairo, Egypt, Sunday, Nov. 28, 2010. (AP)