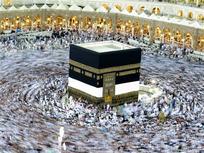 At least 2.5 million Muslims began the annual haj pilgrimage on Sunday, heading to an encampment near the holy city of Mecca to retrace the route taken by the Prophet Mohammad 14 centuries ago.

Traveling on foot, by public transport and in private cars, the pilgrims will stream through a mountain pass to a valley at Mina, some three km (two miles) outside Mecca. The path is the same as the Prophet himself took on his last pilgrimage.

The haj, one of the world’s biggest displays of mass religious devotion lasts for five days. In the past it has been marred by fires, hotel collapses, police clashes with protesters and deadly stampedes.

Saudi Interior Minister Prince Nayef said on Wednesday the kingdom could not rule out an attack by Al Qaeda’s regional wing, although the kingdom’s forces were ready to combat any such operations.

Al Qaeda in the Arabian Peninsula on Sunday denied it had any intentions of targeting Muslim pilgrims at haj.

Islam is now embraced by a quarter of the world’s population and haj is a duty for all able-bodied Muslims who can afford it. Many wait for years to get a visa.

“I can’t explain the feeling of being here,” said Mahboob Bangosh, a Canadian pilgrim from Toronto of Afghani origin.

To minimize the risk of overcrowding and to lessen congestion on the roads the authorities will for the first time be operating a Chinese-built train that will call at haj sites.

The $1.8 billion railway project has tracks that are 18 kilometers long and will transport 180,000 passengers this year, said Habib Zein Al Abideen, assistant minister for municipal and rural affairs.

Due to its limited capacity, the train will this year only carry residents of Saudi Arabia or other Gulf Arabs and next year will open to others nationalities, he said.

“It will be big improvement. Tickets cost only a symbolic amount,” said Walid al-Mushawer, a Saudi pilgrim.

Saudi Arabia has worked hard to improve facilities to ease the flow of pilgrims at haj. In 2006, 362 people were crushed to death. Reuters