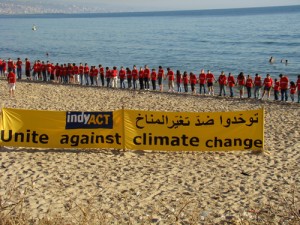 The effects of global warming are still a low priority for conflict-prone Lebanon, where environmental neglect rules.

Skiers and the tourist businesses that depend on them hope this year’s warm winter and brief season was not a harbinger of the future for the Arab world’s only snow playgrounds.

Christian Rizk, 47, manager of the Mzaar ski resort near Faraya, shies away from that idea, saying the season, which spanned barely half the once-normal three months, might have been an aberration. But he says the resort is adapting anyway.

“Last season was catastrophic,” he told Reuters on a sunny late autumn morning near the barren slopes of Jebel Sannin, Lebanon’s second highest mountain at 2,695 metres. “This year we are installing new ski-lifts higher up, above 2,000 metres.”

That mirrors how animals and plants seek higher altitudes as their habitat warms up — Lebanon expects maximum temperatures to rise 1 degree Celsius (34F) on the coast and 2C inland by 2040, according to government calculations.

But some species, including Lebanon’s national symbol, the mighty cedar tree, are already straining at their upper limits. Cedars, some up to 3,000 years old, form the highest treeline.

“I couldn’t give you a specific date when we might see the last cedar on our mountains, but eventually that might happen,” said Vahakn Kabakian, an Environment Ministry official preparing Lebanon’s next climate change report to the United Nations. 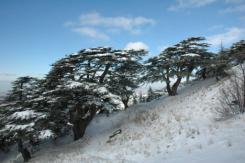 The ministry says Lebanon faces rising sea levels and can expect dwindling rainfall, hotter, drier summers and more extreme events such as floods. Tourism and agriculture are among the most vulnerable economic sectors.

In many cases, climate change will exacerbate Lebanon’s water and energy crises, as well as air pollution and other environmental woes afflicting a country whose political troubles and dysfunctional administration often stymie action.

“Climate change should become the number one priority. It’s a survival problem,” Kabakian said. “Then again we lack the funds to implement the steps we’d have to take for mitigation.”

Despite its relatively high rainfall, Lebanon expects to slip into water deficit by 2015, regardless of climate change, thanks to urbanisation, population growth and mismanagement.

In Beirut, summer demand for water already exceeds what the network supplies — partly because around 40 percent is lost to leaks — so many people pump from wells. Over-extraction from coastal aquifers has led to seawater intrusion and salinity.

Reduced snowfall will hurt groundwater recharge and rivers. Snow melting earlier in spring means less water will be available in summer when farmers need it for irrigation.

Many Lebanese have noticed streams drying up, unusual heat waves and altered rain and snow patterns in recent decades, but scientists say they lack the data to ascribe precise causes.

“There are clear changes,” said Muatasem El-Fadel, professor of water resources at the American University of Beirut. “They could be readily attributed to climate change, but from a scientific perspective we tend to want more evidence.”

Almost anything Lebanon did to tackle its dire environmental problems would also mitigate the potential impact of climate change, but so far there has been more talk than action.

And even the talk is mostly focused on energy.

In a country that has mostly ignored solar energy even though its power plants supply only two-thirds of electricity demand, few would bet that an official target for renewables to contribute 12 percent of national needs by 2020 will be met.

Lebanon, despite its high per capita energy use, contributes relatively little to global greenhouse gas emissions and is keen to attract funds from developed countries to finance measures to reduce its vulnerability to the effects of climate change.

In the meantime, the profit motive, oiled by tax breaks or new regulations, might inspire moves toward hybrid cars, cleaner fuels and greener technologies, says Karim Makdisi, a political studies professor at the American University of Beirut.

“The transformation of the global economy towards this greener economy has a huge amount of business opportunities, which doesn’t go amiss in Lebanon,” he argued.

Well-connected businessmen cornering exclusive dealerships to import hybrid cars or cabinet ministers burnishing Lebanon’s green credentials by belatedly switching some power plants to gas rather than fuel oil may have some spin-off benefits.

“But energy is not the only concern when it comes to climate change,” Makdisi said. “Ultimately, you’re talking of a way of life, adapting to a new way of living which no longer consumes so much or is so inefficient in its consumption patterns.”

In a country where water is cheap and unmetered, concierges sluice pavements with it to keep the dust down. Housewives slosh it over balconies. Broken pipes gush for days in the streets.

“Water is soon going to become a luxury,” said Walid Kanaan, manager of the Intercontinental in the ski resort of Ouyoun al-Siman, listing the hotel’s energy- and water-saving measures.

“The whole idea is new because there has always been water here from the snow, but we are becoming more sensitive to it.”

The hotel can arrange hiking trips, quad bike rides or other activities, but in a ski resort it still depends on snow.

“If it snows tomorrow, you can expect to see people queuing and occupancy would go to 100 percent,” Kanaan said. “It wasn’t a great year, but we are hoping this year will be better.”