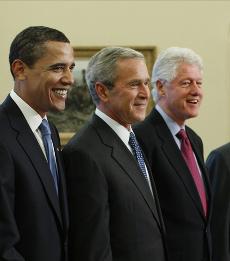 Former US President, George W. Bush considered in his memoirs “Moments of Decision” that the Israeli war on Lebanon in July 2006 contributed to the weakening of Hezbollah and strengthened what he used to call “the newly born democracy in Lebanon”. About the July war, Bush said: “The newly born democracy in Lebanon became stronger due to this aggression, because it bore the experiment”, but “the results for Israel were various”, and “its campaign against Lebanon weakened Hezbollah and helped it to protect its border”. Bush voiced disappointment in the Israel Defense Forces’ performance against Hezbollah in Lebanon in 2006, “Israel’s shaken military performance cost it international credibility”.

Less than a year later, Olmert conveyed both intelligence and a request: The Syrians have a North Korean military nuclear facility, and Israel wants the United States to bomb it. The Syrian Dair Al-Zour (Deir Ezour) site was among the “Moments of Decision” that he almost took, in response of an Israeli demand, had it not been for his fear of its repercussions.

Bush was already embroiled in two wars in the Middle East. And here Olmert was asking him to attack a second Arab country, and a third Muslim one, in an operation that would help Israel directly but the U.S. only indirectly. As angry as America was at Syria for assisting its enemies in Iraq and undermining Lebanon’s government, this was a bit much.

The president is not omnipotent – not against Congress (especially when controlled by the other party ), and not even within the executive branch. Bush needed CIA approval, and then-CIA chief Michael Hayden withheld it: Yes, it was a reactor, but it could not yet manufacture a nuclear weapon.

Bush added that he told Olmert, “I cannot justify an attack on a sovereign state without having the intelligence agencies telling me that there is such a weapon program”.

Bush denied what he called a rumor, that he gave “Israel” the “green light” to attack the site.