Sarkozy reiterates his support for Lebanon 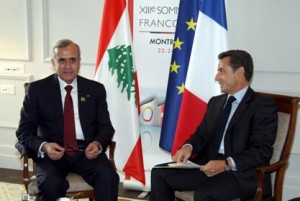 Suleiman met with Sarkozy Saturday .on the sidelines of the 2010 Francophonie summit which is being held in the Swiss town of Montreux .

Talks focused on the stalled Middle East peace process and the bilateral ties between the two countries.

Earlier Saturday, Suleiman and the First Lady took part in the opening session of the 13th summit of French speaking nations .

President Suleiman was reportedly elected as vice president of the 13th Francophonie summit.

Suleiman is scheduled to address the challenges facing the region during his address to the summit.

Other key agenda issues at the 13th summit include human rights, democracy and the environment.

The 2010 summit was originally supposed to have been held in Madagascar, but it was dropped as a venue because of the confused political situation in the island.

The Francophonie, which mainly groups former French colonies, is the French-language equivalent of the British-led Commonwealth of Nations and a summit is held every two years.