France, UK , US warn against meddling with UN tribunal 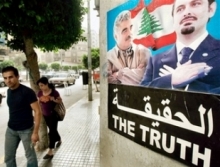 The United States, Britain, France and others warned on Monday against interference with a U.N. tribunal investigating the 2005 murder of Lebanese prime minister Rafik al-Hariri.

The remarks during a U.N. Security Council meeting on the Israel-Palestinian crisis came after Syrian President Bashar al-Assad is believed to have raised his concerns about the tribunal with Saudi King Abdullah in Riyadh.

“Efforts to discredit, hinder or delay the tribunal’s work should not be tolerated, and those who engage in them do not have the interests of Lebanon or justice at heart,” Anderson told the 15-nation council.

“We are concerned about increasing rhetoric aimed at undermining the special tribunal for Lebanon,” he said. “This tribunal should be allowed to continue its work unimpeded.”

French Ambassador Gerard Araud made similar remarks, saying Paris was “concerned by the present tensions, in particular with respect to the special tribunal for Lebanon.” Russian envoy Vitaly Churkin said there should be “no politicization” of the tribunal’s work.

A council diplomat told Reuters on condition of anonymity that the comments were clearly aimed at both Syria and the Lebanese militant organization Hezbollah.

NO RESPONSE FROM SYRIA

Hezbollah, part of Lebanon’s national unity government, has denounced the U.N.-backed court as a tool of U.S. and Israeli policy and called on Prime Minister Saad al-Hariri, Rafik’s son, to repudiate the tribunal.

Asked about his concerns regarding the tribunal, Israel’s new U.N. Ambassador Meron Reuben told Reuters in an interview the Jewish state hoped to “avoid spillover of Lebanese politics into Israeli territory.”

Israel fought a one-month war against Hezbollah in 2006 after a group of the Iranian-backed militants crossed the Lebanese border and seized two Israeli soldiers.

Syria, initially implicated by U.N. investigators in the bombing that killed Hariri, has always viewed the tribunal as politically motivated. Syrian officials say any indictments of Hezbollah would be considered to be targeting Syria too.

Syrian U.N. Ambassador Bashar Ja’afari addressed the council as well, even though Syria is not a member. He made no comment about the tribunal.

Syria has denied involvement in Hariri’s assassination but was forced to end its three-decade military presence in Lebanon following an international outcry.

Fears of violence have intensified since rumors of the impending indictments began to circulate. Pro-Syrian politician Suleiman Franjieh warned last month of sectarian war in Lebanon if the tribunal indicted Hezbollah members.

It was the Lebanese government that originally requested the establishment of the U.N. court and agreed to pay almost half its costs. But political winds have shifted in Beirut.

Current Prime Minister al-Hariri has mended relations with Damascus. In a turnaround, he has said he was wrong to accuse Syria of killing his father and that accusations against Damascus had been politically motivated.