Analysis: Why is Hezbollah So Scared? 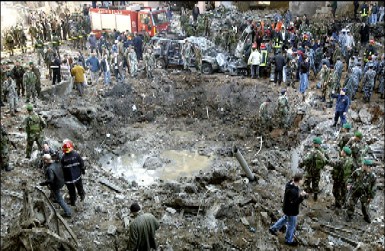 It seems that it is the law of the jungle that is being followed. Israel is keeping Hezbollah on its toes with aerial surveillance, spies on the ground, warehouse explosions in villages, and threats that it will launch a new assault. Hezbollah in turn is going after the March 14 Alliance, pursuing Lebanese Prime Minister Saad Hariri and his cabinet, demanding the heads of the false witnesses, that were described as such by Hezbollah even before the disputed Hariri tribunal began.

What is clear, and has already been declared, is that Hezbollah is insistent on abolishing the Special Tribunal for Lebanon. This is a major demand, but what will Hezbollah offer in return?

Will Hezbollah try the suspects that are affiliated to the group and punish them? No.

Will it hand over its weapons in return for an end to the tribunal? Definitely not!

More importantly than this, does Saad Hariri even have the power to end this tribunal? I believe not.

In which case, why has Hezbollah entered this abrupt battle with the international tribunal, utilizing all sorts of threats and intimidation tactics, especially since the tribunal has yet to even reveal its list of suspects? The tribunal has not revealed the names of any of its suspects, nor the parties that it believes were involved in Rafiq Hariri’s assassination.

Even if we assume that some members of Hezbollah will be named and accused, and documents will be provided proving their involvement, the trial will not go beyond those implicated, in other words the Hezbollah leadership and the rest of the party will not be implicated. This tribunal is not investigating genocide, as was the case with the international tribunal that dealt with those accused of war crimes in Bosnia. This is a criminal tribunal whose role will not go beyond announcing a list of suspects, as was the case with the Lockerbie trial where both the defence and prosecution were not allowed to accuse any figure that was not included in the designated list.

I asked a member of Hezbollah why the party was acting as if the international tribunal was the end of the world, and I received an extremely unconvincing answer. The Hezbollah member said that his party was afraid that the tribunal would cause a sectarian rift in Lebanon. I said, doesn’t Hezbollah actions today represent the pinnacle of sectarianism, for they want to put an end to a tribunal investigating the assassination of a Sunni leader, and are pursuing Sunni leaders in order to achieve this; therefore does this not represent sectarian practices that are far worse than the international tribunal’s pending decision?

A second person justified Hezbollah’s state of panic and insistence on ending the tribunal as being in order to prevent any of its members being accused of assassinating Hariri, saying that regardless of whether these members are innocent or guilty, Hezbollah does not want to appear as a group that sells its members down the river. This is perhaps the only logical explanation that I have heard so far. Hezbollah now faces two options; it can follow Libya’s example, handing over the suspects, defending them in court, and then refusing to recognize the court’s decisions, like all civil defendants in the world. Alternatively, Hezbollah can act in the same manner that it has in the past, rejecting all extradition demands issued against its members, the most prominent example of this occurred with regards to Imad Mughniyah, who despite repeated demands for his arrest by Interpol was never handed over.

A third person I talked to said that he believed that Hezbollah was not a lion defending its cubs, but rather a sly fox claiming to be the victim in order to capitalize on the crisis. He argued that Hezbollah is not truly in crisis or a state ofpanic, and that it is simply attempting to push back its opponents and maximize its political gains. This is also an acceptable psychological analysis, especially considering that Hezbollah is a heavily armed paramilitary organization that has never recognized any international resolutions or domestic laws.

Finally, a fourth opinion is that the party is behaving according to its usual practice and is creating a crisis to serve the interests of another. However this is not a strong conclusion because creating a crisis involving the Lebanese Prime Minister would hardly be in the interests of any foreign party, especially as Saad Hariri has taken up the position of prime minister with the weakest prime ministerial powers in the history of Lebanon after he was forced to make a substantial concessions upon taking office. Therefore what more could he concede? Nothing!

* General manager of Al -Arabiya television and is also the former editor-in-chief of Asharq Al- Awsat, and the Arabic weekly magazine,, Al Majalla.