by yalibnan
1859
Some of Saddam Hussein's phrases were almost identical to Mahmoud Ahmadinejad's promises of "war without limits".
Share: 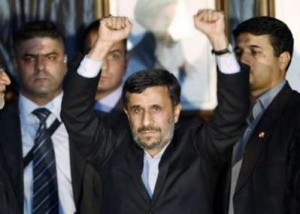 Iran’s President Mahmoud Ahmadinejad’s visit to Lebanon has given his many admirers there a chance to cheer him, and hear at first hand his defiant oratory.

Of course the great majority of those who turned out to see him are Lebanese who share his Shia beliefs, and also support Hezbollah.

Mr Ahmadinejad stressed though that he was speaking to all Lebanese, trying to shrug off the image of someone with sectarian appeal in that divided country.

While the Iranian president is naturally the darling of the Shia community, it is only fair to say that his determination to defy the United States and the international community more widely has won him widespread support – at least at the rhetorical level – across the Arab world.

His stance on the nuclear issue is of course central to his appeal to that wider constituency.

Iran’s position – that it’s nuclear programme is entirely civilian in character, but that Iran is entitled to resist people who wish to make sure of that – is nonsensical to many Westerners.

If that country is simply intent on generating nuclear energy, why cause such difficulties to UN inspectors or reject international offers to enrich uranium overseas on Iran’s behalf? Why put up with the hassle of UN sanctions or the threat of air strikes if all you’re after is electric power?

To many in the Middle East though the answer is obvious – since Iran insists upon its “right” to run all aspects of its nuclear programme without foreign interference, challenging the inspection regime or the wishes of the White House is precisely what gives Mr Ahmadinejad his status as a bulwark against the Americans or Zionists.

And indeed there must be many of his supporters who earnestly hope that Iran is developing nuclear weapons, but would understand why Mr Ahmadinejad cannot state that openly.

This type of double speak not only has precedents but, it might be argued, is actually a defining characteristic of those who capture the imagination of the “Arab street” and seek to lead it.

Osama bin Laden did not try, personally and directly, to claim responsibility for 9/11. Millions of his supporters insisted both that he had not done it – blaming various forms of conspiracy for the attacks – and that he was a great man. Why was he great if he hadn’t done anything?

To many a Western mind, bin Laden or his supporters’ double-think on this issue was incomprehensible and infuriating. Tony Blair’s first “dossier” – a Joint Intelligence Committee paper declassified at his insistence for public use – was not the one on Iraq, it was an analysis of why bin Laden was responsible for 9/11.

However, the Cairo cabbie or the Hezbollah militiaman apparently accept that evasion and deception are intrinsic parts of the struggle against the US or Israel because there are times when those powers might wreak terrible vengeance on their enemies.

Standing against the West 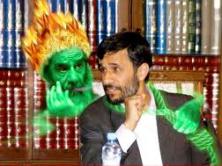 Best to wrong foot them with some clever rhetoric, avoidance of specifics, or downright lies. The problem of course with this type of double speak is that it increases the scope for misperception and even accidental war.

Saddam Hussein qualified as another of those who sought leadership of the wider Arab or Muslim community by standing as a bulwark against the West.

Some of his darkly vague phrases about what might happen to Israel if it attacked Iraq were almost identical to Mr Ahmadinejad’s recent promises of “war without limits”.

Saddam though talked up his powers to such a degree that he could not in the end admit even to his own generals that he did not have any weapons of mass destruction any more. Even when the survival of his regime was at stake, the Iraqi president could not give full co-operation to Hans Blix and his UN inspectors.

So, today, Iran’s desire to enjoy the support of what Iranian ideologues term “the oppressed” by thumbing its nose at the UN or US President Barack Obama, may be a crowd pleaser in southern Lebanon, but it could be increasing the chances of war.

While the White House still pins its hopes on the new sanctions package voted through the UN Security Council in June, there are voices murmuring warnings with increasing urgency about the progress of Iran’s continuing uranium enrichment programme.

Those whisperers include some of the “usual suspects” one might expect such as Mossad or MI6. However, those who argue that a military option has to be prepared also include such influential figures as Robert Gates, Mr Obama’s defence secretary.

Today, in a speech at Beirut University the Iranian president pledged to press on with the nuclear programme accusing the West of trying to, “keep us in the dark”.

It was typical Ahmadinejad defiance – but it was also the type of language that is strengthening the hand of those in the Pentagon or Israel who believe that a military option could be required to stop Iran’s nuclear programme. BBC