by yalibnan
2374
By Diana Nemeh Welcome to Lebanon, your timing is impeccable. As if I have not heard the words ‘secretarian strife’ one too many times lately, now your trip is adding fuel to the fire making tensions here so thick we could cut it with a knife.
Share: 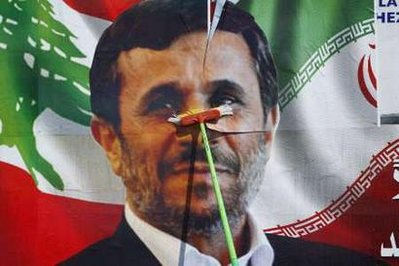 Welcome to Lebanon, your timing is impeccable. As if I have not heard the words ‘secretarian strife’ one too many times lately, now your trip is adding fuel to the fire making tensions here so thick we could cut it with a knife. Not only do you have the United States Embassy in Beirut sending out a notice to American citizens about your trip, you had Israel scrambling around to cancel your visit and now we have a never before heard of group calling itself the Abdullah Azzam Brigades warning: “The whole of Lebanon will tremble and its ground will quake if Ahmadinejad steps foot on it.”

Your diplomatic visit, according to some, will strengthen ties with Lebanon but it seems that your goal is to isolate us from each other and the rest of the world especially when you claim the southern Lebanese border as ‘Iran’s border with Israel.’ Perhaps you bought the right to that claim when you ‘gave’ cash to rebuild the south after the 2006 war with Israel and Hizbullah accepted this since they did not trust the bureaucracy of the Lebanese government.

It should come as no surprise that Ahmadinejad would be here during these tense times since he is known within Iran and internationally as a controversial figure and till this day the legitimacy of his 2009 reelection to presidency is still rightly questioned and criticized. He is an outspoken critic of the United States, Israel and the UK and that only serves to deceive the public about the Islamic world and at the same time strengthen his stance of opposition while maintaining his status quo.

His intention here is to use the land of Lebanon as his own playground for war; land that he may feel entitled to since it was the Iranian Revolutionary Guards that created Hizbullah and continues to support them with training, funding and weapons, thus creating a state within a state. His visit to Lebanon will not yield positive results nor strengthen the ties for the country; his visit only shows support to just a part of the country that welcomes his visit, Hizbullah and its backers. Therefore this gesture and his influence here cannot yield positive results for the whole of the country, especially when increasing tensions between the Sunni-Shiite groups are threatening to bring down an already fragile unity government.

Should Lebanon trust Ahmadinejad with a track record that has had a negative effect on the rest of the world and most importantly his own country? Ask the citizens of Iran who are constantly denied their given human rights and have to suffer economically due to imposed sanctions as a result of Iran’s nuclear program. Since Ahmadenijad’s controversial reelection in 2009, Iranians have united their political beliefs and are joining together with the need for freedom as their common ground. Their protests have turned into a Revolution that will not stop until the Islamic Republic falls. Just as he abused the trust of the people of Iran to keep him in power, so will he abuse the trust of the people of Lebanon to push his own agenda. While we wait for these few days to pass, hopefully the important players in Lebanon could put his visit into perspective and realize that the country does not need another figure to meddle in its affairs because Lebanon is already suffering from the ‘too many cooks in the kitchen’ syndrome.

So Mr. Ahmadinejad, I hope you and your entourage of 50 businessmen enjoy your short stay here because despite your efforts to shake things up, when you leave and the tensions relatively simmer down again, Lebanon will always stay Lebanon for its people and I will be celebrating your departure at Sky Bar for their closing weekend.