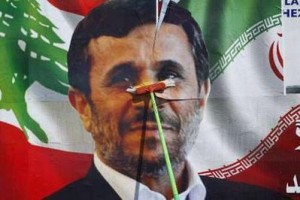 Iranian President Mahmoud Ahmadinejad will arrive in Lebanon on Wednesday at 8:15 a.m. on a two-day official visit .

Speaker Nabih Berri is expected to receive Ahmadinejad at Beirut’s Rafik Hariri International Airport. The Iranian president and Berri will then head to Baabda at 9:30 a.m. where Lebanese president Michel Suleiman will receive them.

Suleiman and his Iranian counterpart will hold a bilateral summit and a press conference, following which Ahmadinejad will head to Al-Habtoor Hotel in Beirut to meet with several politicians

Ahmadinejad will then head to Baabda where Suleiman will host a lunch in his honor.

Lebanon and Iran are expected to sign several agreements . Ahmadinejad is also expected to make a joint appearance with Hezbollah chief sayyed Hassan Nasrallah and to viist south lebanon on Thursday.

Hezbollah which was created by the Iranian Revolutionary Guards and continues to be trained, armed, funded and backed by Iran is planning a huge reception for him upon arrival at the Beirut Airport road