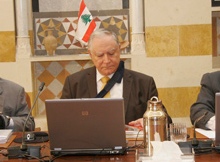 The Cabinet has decided to postpone the discussion of the “false witnesses” issue to October 20.

Justice Minister Ibrahim Najjar ( pictured) submitted his report on false witnesses, stressing that his report is “legal and not political and that its content contains answers to the questions raised during the August 18 session,”

“After the detailed presentation by the justice minister, a number of ministers participated in a general discussion about false witnesses and how they should be prosecuted, in addition to the cabinet’s responsibility in that regard.”

President Michel Suleiman started the session by announcing that the final touches have been arranged for preparations to welcome Iranian President Mahmoud Ahmadinejad, who is due in Lebanon Wednesday morning.

“We’re counting on this visit to fortify the ongoing good relations between us and Iran, which are characterized by mutual respect, and we stress that Lebanon welcomes the visit,” Suleiman said, noting that “memorandum of understanding will be signed tomorrow.”

Prime Minister Saad Hariri briefed the cabinet about his trip to Egypt and his talks there that tackled the regional situation, “especially regarding the Israeli intransigence and the Egyptian concerns over the tensions in Lebanon.”

Hariri stressed “the priority of dialogue and preserving stability in Lebanon,” Mitri added.

“The country would suffer a burdensome cost if political disputes agitated and diverted attention from people’s living conditions, which are numerous,” Hariri said

“the cabinet has agreed during today’s session to authorize the ministers concerned to sign the agreements and memorandum of understanding that will be reached tomorrow with the Iranian side during President Mahmoud Ahmadinejad’s visit.”

However, the agreements and memorandum of understanding will later be discussed by the cabinet which is the relevant side entitled to approve them, Mitri said