by yalibnan
1434
By Diana Nemeh And the title goes to … Ziyad Baroud, minister of Interior and Municipalities … applause?
Share: 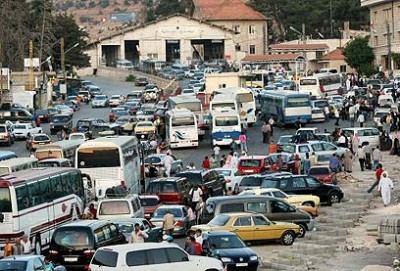 And the title goes to … Ziyad Baroud, minister of Interior and Municipalities … applause? This title could be added to Baroud’s collection, but he should perhaps take a closer look at it since it is not as notable as the others.

Just like our Lebanese ministers today, Napoleon carried his selfishness so far that it was not easy to persuade him on any issue that did not concern himself. Napoleon was also responsible for the bloodshed on the battlefield while Baroud is also being held responsible for the bloodshed on the battlefield of traffic we face every day. When Baroud became minister in 2008, one of the first things on his agenda was to ease the burden of traffic, yet, here we are in 2010 and traffic has become quite the epidemic keeping Lebanon with a record for the worst traffic and accidents in the Arab world.

Although, I appreciate Baroud being outspoken on this dilemma by quoting facts and figures, and I got a kick out of seeing him leading the hajiz (security checkpoint) in Achrafieh at 1:30 am, realistically these gestures are not making a difference. Raising the fines of infractions 300 percent is really not a deterrent, especially when some of us have wasta (clout) and others simply cannot afford it. Baroud could have been a good representative of the people but he simply got sucked into the Lebanese system that is too complicated to beat, so he had no choice but to join them. So it may not be fair to ask him to take full responsibility for the issues concerning traffic, especially considering the government’s weak support system.

Therefore, while we wait on traffic reforms to be implemented, crashes and deaths resulting from crashes are being recorded daily in Lebanon. So at this point, we have three options: 1. Do nothing and accept things for the way they are. 2. Wait on the government to do something. 3. Take matters into our own hands. Obviously the first two options have never taken anyone anywhere.

Now instead of relying on the government or one man to make a difference, it is time for us to set the records straight. Perhaps the traffic here represents Lebanon and the character of most people in Lebanon: fast paced, chaotic, impatient with quick reactions and tempers. So first and foremost, we all need to SLOW DOWN; excessive speed is a factor in one third of all fatal crashes. Slow down and relax, leave five minutes earlier than usual and don’t stress when you get stuck in the inevitable aj’a (congestion) because we all know in Lebanon, if you are late then you are on time and if you don’t show up then you are late.

Second, obey the officer in army fatigues smoking his cigarette and directing traffic, he is placed there when the traffic lights (sometimes out) are not helping with the gridlock and be patient with him since he is working with aggressive drivers in our summer’s heat.

Third, make sure your car’s maintenance is up to date. The accident in early September that killed a family of five in Damour village occurred when their four-wheeler overturned after one of its tires ruptured, lives that could have been spared due to simple maintenance. Importantly, pedestrians should always have the right of way; pay attention to people walking on the side of the road or crossing the street and let them pass, they are no match to a three-ton vehicle. Also, don’t forget to wear your seatbelt, instead forget the excuses as to why you can’t wear it because over 60 percent of people killed in accidents were not wearing theirs.

Lastly, when using a cell phone either put the Bluetooth on or hang up and drive and wait until you are at a full stop to read/send that SMS or BBM. Distracted drivers account for 98 percent of most automobile accidents which also happens to be the leading cause of death for people under the age of 35.

These are just a few of the steps we can take as responsible drivers to ensure somewhat safer roads but to increase the probability of safety, the government should help us by taking the following steps:

* The process for obtaining a driver’s license should not be lenient (wasta or no wasta) and should not be made available for purchase.

* A hajiz should be studied and carefully setup. The September accident on Jiyeh road killing six people and injuring more than 10 was partially blamed on the hajiz for being in the middle of the highway and also excessive speed.

Finally, just like the advertisement from Label 5 says, “Be Different. Respect Traffic Laws,” especially by not drinking and driving. If we do our part, hopefully it will motivate the government and others to do theirs. Quite possibly our Napoleon could be better known for leading us into a victory of safer roads that will allow for the smooth flow of traffic and less stress on our streets, in our cars and our lives.