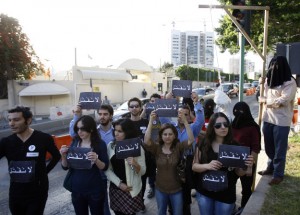 Amnesty International has written to King Abdullah of Saudi Arabia, urging him to commute death sentences imposed on two men convicted of “sorcery,” the rights group said on Friday.

In the letter sent on Thursday, the London-based watchdog called for clemency for Lebanese television presenter Ali Sabat and Abdul Hamid al-Fakki, a Sudanese about whose case little is known, Amnesty said in a statement.

If their death sentences are upheld after appeal, they will be referred to the king for final ratification.

“Two men are at imminent risk of facing the ultimate cruel and inhuman punishment without having committed anything that would appear to constitute a crime,” said Philip Luther, Amnesty’s deputy director for the Middle East and North Africa.

He said the pair “must be immediately and unconditionally released if the acts for which they have been convicted amount to no more than the legitimate, peaceful exercise of their rights to freedom of expression and religion.”

Sabat, a 46-year-old father of five, was sentenced to death last November by a Saudi court for practising witchcraft.

He was arrested in May 2008 by the religious police in Medina, where he was on a pilgrimage.

The case against him was brought after he gave advice and made predictions on Lebanese television.

Little has been heard about the case since April, when his lawyer in Lebanon said that Sabat was likely to get a reprieve.

Fakki was accused of practising sorcery after a man working for the religious police “entrapped him by asking him to produce a spell that would lead to the man?s father leaving his second wife,” the Amnesty statement said.

It said Fakki, 36, was arrested after apparently agreeing to produce a spell in exchange for money.

“Following his arrest, he was questioned, apparently beaten, and is believed to have confessed to carrying out acts of ‘sorcery’,” the statement said.

It said he was sentenced to death in March 2007. “He had no legal assistance and very little is known about his trial proceedings as they were held in secret,” Amnesty said.

It added: “The detention of the two men on vague ‘sorcery’ charges also contravenes international human rights standards by punishing forms of expression that, while unusual, have been peaceful.”

Amnesty said that the Saudi “authorities have arrested scores of people on ‘sorcery’ charges in recent years.”

The last known execution for sorcery in Saudi Arabia was in November 2007, when Egyptian Mustafa Ibrahim was beheaded in Riyadh.AFP

Photo: A protest in Beirut against the Saudi death sentence of Lebanese television presenter Ali Sabat