Will a Hezbollah indictment spark war in Lebanon?

by yalibnan
2187
With an AK-47 on its flag, it is not too subtle message that Hezbollah is willing to use violence to seize power
Share:

Hezbollah has been deemed a terrorist group by America. However it is now part of the Lebanese government. This despite that the flag for the group has the image of an AK-47 on it. That is a not too subtle message that Hezbollah is willing to use violence to seize power.

Did Hezbollah plan and implement the suicide attack against Rafiq Hariri, the prior prime minister of Lebanon? A total of 22 people were murdered in the attack. The UN Tribunal ( Special Tribunal for Lebanon) has just made a new request to talk to members of Hezbollah about the assassination.

Al Jazeera reports that Suleiman Franjieh told the Lebanese TV channel LBC that “If indictments come out against Hezbollah in the Hariri assassination, there is war in Lebanon…and today the atmosphere is just waiting for a spark.”

Hezbollah claims that Israel was responsible for the murder of Rafiq Hariri. Hezbollah is an arch enemy of Israel. Hezbollah has the backing of Iran. Together Hezbollah and Iran aim for the destruction of Israel.

Saad Hariri, Lebanon’s current prime minister, and son of Rafiq Hariri, has recently stated “The country has been drowning in a war of words in recent weeks.” He has recently stated that he no longer believes that Syria was involved in the assassination of his father. He did not offer an opinion as to who he thinks was responsible for the killing.

In recent weeks the prior Lebanese security chief Brig. General Jamil Sayyed has been on the attack against Saad Hariri. He wants Hariri to take a lie detector test over the issue of if he gave money to witnesses to implicate Sayyed in the murder of Rafiq Hariri. Hezbollah is supporting Sayyed and caused a ruckus at the airport by sending armed guards to transport Sayyed from the airport.

Hezbollah appears to be making threats to Hariri, indicating it would “Cut off the unjust hand” of anyone who threatened Sayyed, notes the Los Angeles Times. There is much tension between Hezbollah and the current prime minister.

Rafiq Hariri was assassinated in 2005. Lebanon has been waiting a long time to find out the facts of who murdered him. Yet now, as the UN Tribunal prepares to reveal the information they have and issue an alert as to the identity of the killers, a sense of trepidation builds.

Since the murder of Rafiq Hariri, numerous members of parliament in the March 14th Movement have also been assassinated. Saad Hariri, Rafiq Hariri’s son described Lebanon as “dangerous but very beautiful. It’s worth fighting for; it’s worth dying for,” reports Newsweek.

The scene after Rafiq Hariri’s vehicle was blown up is horrific. Photos show vehicles demolished with the pieces strew all over the streets, fires burning, and nearby cars flattened. This ominous sight of destruction sends the message that whoever murdered PM Hariri was willing to use a powerful bomb that would kill all in the area.

Whoever did this assassination is an evil force in the world. If people of Lebanon were involved in the assassination it adds more tragedy to the killing. How can anyone assassinate someone who did so much good for a country and had such dreams to revitalize Lebanon?

Prime Minister Saad Hariri is in a tenuous situation. If he has Sayyed arrested it may spark chaos in the country. However, if he appears weak in the face of threats from Hezbollah that could also lead to violence. It seems that Saad Hariri is waiting for the pronouncement of the UN Tribunal. 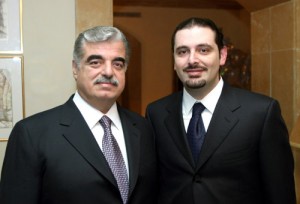 When the news from the tribunal arrives, Hariri will have many government and personal decisions to make. It is quite tragic that Lebanon lost its former Prime Minister to assassination. And now his son is left to try to obtain truth and justice. He must handle the turbulent emotions that surely arise as he makes decisions about how to react once the public hears the news of whether or not Hezbollah is deemed involved in the assassination of his father. AC