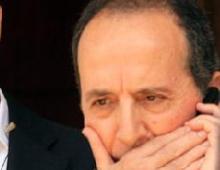 “Hezbollah must start penalizing the primary false witness, which is now known and uncovered,” Sakr said.

This comes after Sakr on Monday accused Sayyed of fabricating the story published by German magazine Der Spiegel last year about the alleged involvement of Hezbollah in former PM Rafik Hariri’s assassination.

The report at the time had quoted sources close to the international tribunal and said it had examined internal documents.

“What was published by the German Der Spiegel was fabricated by Jamil Sayyed,” Sakr said during a press conference.

Sayyed along with 3 other generals was detained from 2005 to 2009 on suspicion of involvement in former PM Rafik Hariri’s murder. In April 2009, the Special Tribunal for Lebanon (STL ) ordered their release without charges due to insufficient evidence. STL prosecutor made it clear at the time they were set free that their release did not mean they are Innocent and that once more evidence is available they could be back in jail.

The Der Spiegel report was published on May, 23 , 2009 several weeks following the release of Sayyed from jail.

Sakr urged Hezbollah to beware and not to play with fire saying there were attempts to ignite Shiite-Sunni strife in the region. He stressed that Hezbollah should .take the responsible stance toward whoever poisoned the relations between the Lebanese people and the Resistance.”

Observers believe that Sayyed , a close ally of the Syrian regime may have attempted in his disclosures to Der Spiegel to exonerate Syria from the accusation of being behind Hariri’s assassination.

The irony here is that Hezbollah tried to protect Sayyed from being summoned by the Lebanese judiciary.

Hezbollah issued a statement last Friday in which it called on the judiciary to revoke Attorney General Judge Said Mirza’s decision to summon Sayyed for questioning after Sayyed said on September 12 that “[Prime Minister Saad Hariri] should take a lie detector test to prove he did not support or fund false witnesses in the Special Tribunal for Lebanon (STL).” The former General Security chief also threatened to take his right “with his own hands” if Hariri did not give it to him.

“I am ready to disclose my bank accounts if Nicolas and the FPM are willing to do so as well,” Sakr said, adding that Nicolas should present evidence to his claims that Sakr has taken money from foreign states.