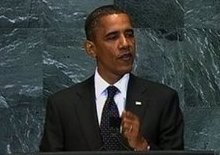 One sentence in the speech, President Obama delivered today at the United Nations General Assembly jumps off the page.

On the surface, that prediction seems like a warning to both sides. But it isn’t.

All is he telling Palestinians is that, with no agreement, the stateless status quo will continue. That is bad, but it’s not catastrophic. After all, Palestinians have lived with the occupation for 43 years and, year by year, their numbers are growing and international support is skyrocketing. As bad as the status quo is, they can weather it.

For Israel, however, Obama warns that without a peace deal, it will never know security and that soon enough “the hard realities of demography will take hold.”

In other words, the Palestinians will hold an overwhelming majority in Israel plus the occupied areas and, inevitably, the whole land will be transformed into some kind of single state, Palestine/Israel. Jewish statehood will disappear as Israelis choose West Bank settlements over preserving the Jewish state within internationally-recognized borders.

Again, for Palestinians, Obama’s idea of a possible future is bad but not “the end.” For Jews, who recall what the price of statelessness is, Obama’s warning is terrifying.

But he is absolutely right. Those are the choices.

My father-in-law who was a Holocaust survivor hated the occupation and West Bank settlements. He used to say that if Polish Jews like him had even a tiny Jewish state to flee to in 1939, it would have been “like heaven.” All the Jews needed was a piece of Palestine, with borders controlled by Jews, which could have let them in.

He died in 1990, never understanding why any Jew would choose an unsustainable Greater Israel over the permanent security of an Israel within the pre-’67 borders, at peace with its neighbors. But then, he was of another time, another place. Growing up in eastern Poland, he could never be the Jewish ultra-nationalist whose worldview was created by the terrors of the New York, Boston, Chicago or L.A. suburbs. Huffington Post