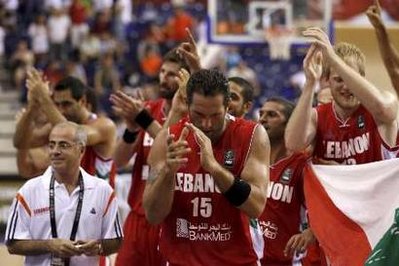 Fadi El Khatib , known to his countrymen as “The Tiger, scored 31 points and Rony Fahed added 17 as Lebanon beat Canada 81-71 Saturday in the opening round of the basketball world championshipsin in Izmir, Turkey on Saturday Aug. 28, 2010.

“It was a very tough very tough game,” Fahed said. “Both teams were playing very physical.”

Matt Freije(notes) nailed a 3-pointer to put Lebanon up 66-64 with about 5 minutes left, and Canada never led again.

“For our team to be successful, we cannot be out-hustled in a game,” Canada coach Leo Rautins said.

Joel Anthony(notes) of the Miami Heat scored 10 of 17 points for Canada in the first half. Denham Brown added 13 points and 6 assists.

Canada hadn’t qualified for a major tournament since finishing 13th at the 2002 worlds in Indianapolis, Indiana.