Lebanon PM: The state should not be a spectator 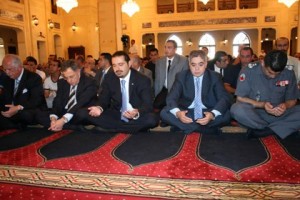 Lebanon Prime Minister Saad Hariri said during an Iftar in Qoreitem on Friday: “It is unacceptable for the state to watch weapons proliferate throughout Lebanon, ” according to a statement from his office.

He said the cabinet will act decisively in dealing with the issue.

Last Wednesday the cabinet decided to form a commission to deal with arms proliferation, following the clashes in the Beirut neighborhood of Borj Abi Haidar on Tuesday night between supporters of the the pro-Syrian Association of Islamic Charitable Projects—also known as Al-Ahbash—and the Iranian backed Hezbollah militants , leading to the death of three people, including Hezbollah official Mohammad Fawwaz.

No one should be allowed to kill citizens then seek protection from a particular group anywhere in Lebanon, Hariri said, adding that “I am speaking about all parties.”

Hariri also said that “everything happening with us now is the result of the present political discourse,” and reiterated the need to protect coexistence by solving problems through dialogue.

“Dialogue is the only way to reach safety as Lebanon has never benefited from internal fighting, but it and the Lebanese have always been the greatest losers,” he added.

Earlier on Friday the prime minister performed the Friday prayer at the al-Amin Mosque with Lebanon’s former PM Fouad Siniora.