Hariri: I will decide when to speak 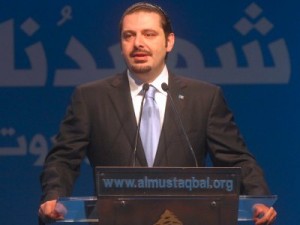 Prime Minister Saad Hariri reiterated during an Iftar on Sunday that he will decide when to speak.

“Many people expect me to come out with a stance, but I said yesterday, I will choose when to speak,” Hariri told a dinner banquet attended by the ambassadors of the Netherlands, Oman, Romania and a number of children of the Islamic Orphanage.

“But I would like to say that political rhetoric should not remain at this level. Whatever the differences between political parties, we should not be using foul language and all kinds of insults,” Hariri stressed.

“Good word is my message to the Lebanese during this holy month (of Ramadan) and with a good word anything becomes possible,” he added.

The pro-Syrian and Hezbollah media have been urging Hariri to take a stance following the speech last Monday of Hezbollah leader Sayyed Hassan Nasrallah in which he attempted to provide evidence that Israel was behind the murder of Lebanon’s former PM .

“We should calmly and responsibly address one another,” Hariri said.

“All we want is the truth behind the 2005 assassination of former PM Rafik Hariri,” the PM added.