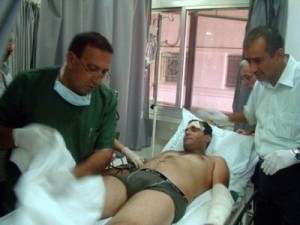 Lebanese and Israeli troops exchanged fire on the border Tuesday in the most serious clashes since a fierce war four years ago, and Lebanon said at least two of its soldiers and a journalist were killed in shelling.

The U.N. urged “maximum restraint” and said it was working with both sides to restore calm, but witnesses in Lebanon reported intermittent Israeli shelling in the area hours after the clashes broke out.

There were conflicting accounts of what sparked the gunfire.

Israel’s military said its soldiers came under fire inside Israeli territory during a routine patrol and retaliated with artillery fire. A Lebanese army officer said the clash started when Israeli troops tried to remove a tree from the Lebanese side of the border.

An Associated Press photo shows an Israeli standing on a crane reaching over the fence that separates the two sides on the Lebanese side of the border.

The Lebanese officer said one of the Israeli shells hit a house in the Lebanese border town of Adaisseh. One civilian was wounded in the shelling, he said. A security official also said a Lebanese journalist working for the daily Al-Akhbar newspaper, Assaf Abu Rahhal, was killed when an Israeli shell landed next to him in Adaisseh.

The officials all spoke on condition of anonymity under military guidelines.

The border has been relatively quiet since the summer 2006 Israel-Hezbollah war that left 1,200 Lebanese and about 160 Israelis dead. Tuesday’s fighting did not appear to involve Hezbollah fighters.

Tensions along the border have risen in recent months. Israel claims that Lebanese Hezbollah guerrillas have significantly expanded and improved their arsenal of rockets since 2006. Among other things, Israeli officials have accused Syria and Iran of supplying Hezbollah with Scud missiles capable of hitting anywhere in Israel, a claim Hezbollah has refused to confirm or deny.

But friction extends beyond. More than 70 people in Lebanon have been arrested since last year on suspicion of collaborating with Israel.

Lebanese President Michel Suleiman denounced the fighting and urged the army commander to “confront any Israeli aggression whatever the sacrifices.”

Suleiman said the shelling was a violation of the U.N. resolution that ended fighting between Israel and Hezbollah in 2006, saying Israeli troops had crossed the U.N.-drawn Blue Line boundary separating the two countries and fired on a Lebanese army checkpoint in Adeisseh.

Hezbollah officials were not immediately available for comment. The group’s leader, Sheik Hassan Nasrallah, was scheduled to address supporters via satellite at a huge rally south of Beirut later Tuesday marking Hezbollah’s “divine victory” over Israel in the 2006 war.

“UNIFIL peacekeepers are in the area and are trying to ascertain the circumstances of the incident and any possible casualties,” said UNIFIL spokesman Neeraj Singh. “Our immediate priority at this time is to restore calm in the area.”

Top photo: Lebanese medics treat a man injured in  clashes which erupted along the tense Israel-Lebanon border, near the village of Adaisseh