Suleiman on Army day: The only solution is consensus 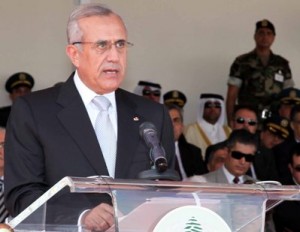 Lebanon celebrated on Sunday the 65th anniversary of the Army Day at the Shukri Ghanem barracks in Fayadiyeh in the presence of the visiting Qatari Emir Sheikh Hamad bin Khalifa al-Thani.

Lebanese President Michel Suleiman said during the celebration that preservation of civil peace was the responsibility of all political parties and urged all politicians to avoid tension in the country.

“Political forces should be aware of the importance of this stage and the dangers that are threatening us,” he said

“As president, I urge all political leaders to abide by media and political clam and avoid the language of threats,” Suleiman said.

His comments come as tension has increased in Lebanon after Hezbollah Secretary General Sayyed Hassan Nasrallah made several speeches earlier in July rejecting the legitimacy of the Special Tribunal for Lebanon (STL), sparking fears of a new domestic conflict similar to the 2008 May Events.

He also said that Abdullah and Assad voiced their keenness to preserve stability in Lebanon during their visit to Beirut on Friday.

“Lebanon has been keen to protect UNIFIL troops ever since they were formed. Coordination between UNIFIL and the Lebanese Armed Forces (LAF) should continue,” Suleiman said. This comes after residents in the South protested against UNIFIL in late June and early July, leading to a series of reconciliation meetings between the residents, peacekeepers and Lebanese army.

The president stressed that cooperation between the army and UNIFIL based on its rules of engagement is a guarantee for the peacekeepers’ good implementation of their mission.

Before the ceremony, Suleiman laid a wreath at an army martyrs memorial in the barracks.

During his speech, he said history has taught the Lebanese that internal violence leads to more violence. “The only solution is consensus,” Suleiman said.

The president added that Lebanon managed to defeat Israel in the 2006 July War through the unity of its people, army and Resistance.

“Lebanon will keep on defending the rights of the Palestinians and their cause. We will also maintain our refusal of the naturalization of Palestinians in Lebanon,” he said.

The army deserves to be the first national institution which in addition to other institutions consolidates the trust of Lebanese in their nation, he said.

While citing the achievements of the government since the Doha accord such as holding elections on time, launching national dialogue and approving the state budget, Suleiman admitted that there are more objectives to be achieved.

He said the government would launch reform at all levels despite skirmishes between politicians.

In reference to Lebanese arrested on suspicion of spying for Israel, the president vowed that all spies will receive maxim punishment if accused. 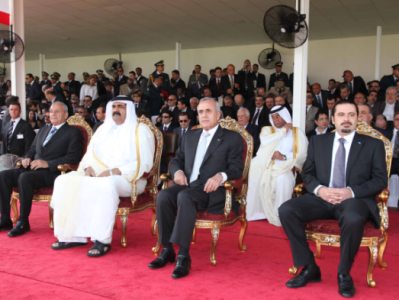