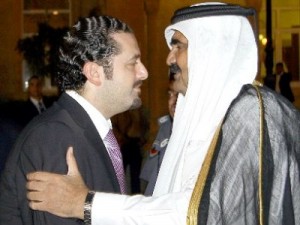 Lebanese Prime Minister Saad Hariri said on Saturday that he is committed to fighting any efforts that could cause conflict in Lebanon and to maintain security and national unity in the face of Israeli threats, according to a statement from his office.

Hariri hosted a dinner at the Grand Serail in honor of the visiting Qatari Emir Sheikh Hamad bin Khalifa al-Thani who arrived in Lebanon for a three-day visit on Friday to meet with Lebanese leaders. President Michel Suleiman, Speaker Nabih Berri and several political and military officials were also present.

Hariri said that Hamad’s intervention during the May 7 events in 2008 helped Lebanese figures reach a compromise.

Qatar played a key role in ending the 2008 crisis, brokering the Doha accord which called for forming a national-unity government and passing a new electoral law.

He wanted to inspect  the  Qatari-sponsored reconstruction projects that were launched following the July 2006 war between Hezbollah and Israel . Thousands lined the streets in a tribute to the Qatari leader.