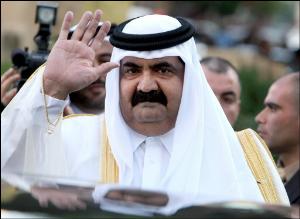 The ruler of Qatar is taking a firsthand look at Qatari-sponsored reconstruction projects that were launched following the July 2006 war between Hezbollah and Israel .

Sheik Hamad bin Khalifa Al Thani’s tour of the overwhelmingly Shiite Muslim area — a stronghold of Lebanon’s militant Hezbollah group — is the first such trip by a visiting Arab leader.

Al Thani traveled by helicopter on Saturday with President Michel Suleiman to the area, which borders Israel. They were met there by Prime Minister Saad Hariri, who is also making his first trip as premier to the region and Speaker Nabih Berri

Hezbollah commanders and officials including Mohammad Raad ( representing Hezbollah leader Sayyed Hassan Nasrallah) head of the party’s parliamentary bloc were at hand to welcome the emir. Thousands lined the streets in a tribute to the Qatari leader.

Upon his arrival at the town of Bin Jbeil he said : “I am happy to be here, in the region that was rebuilt after having been destroyed.”

The officials then moved on to the reopening of the Bint Jbeil hospital, where Sheikh Hamad said during the ceremony: “We have no doubt that Lebanon is capable of taking its own decisions on its own without resorting to foreign meetings.”

“You will find us supportive of the voice of wisdom and all the Lebanese regardless of their sect,” he continued.

“You have lifted Lebanon’s head high and the heads of all Arab leaders, congratulations to Lebanon and the South on the reconstruction,” he said.

The emir of Qatar arrived  in Beirut Friday evening , about one hour following the departure of Saudi Arabia’s king Abdullah Bin Abdul Aziz and Syria’s president Bashar al- Assad  who were in Lebanon  for summit talks with Lebanese officials aimed at defusing the tension in Lebanon.

The emir  who is being accompanied by his wife  H.H. Sheikha Mozah Bint Nasser Al-Missned is staying until Sunday. Yesterday president Suleiman hosted   a dinner in  his honer at the  Baabda palace .

During  the dinner  he called  for preserving Lebanon’s sovereignty and enhancing its stability.

“Lebanon should remain sovereign, free and independent in facing all the circumstances arising from the region’s developments,” Sheikh Hamad said

Commenting on the tension in Lebanon , he said :

“We understand the sensitive moment today … We hope that Lebanon will not drift to where its enemies want.”