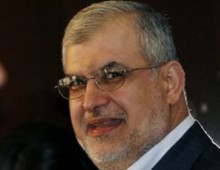 and aimed to achieve Israeli goals.

“Preparations were underway by the Special Tribunal for Lebanon to issue an “unjust ruling as a way to achieve Israeli goals, ” Raad said

“Israel today is a defeated entity that is left with no other reliance but on the weakness of the Arab stance and stirring up strife and luring some Palestinians into futile negotiations,” Raad said.

The ruler of Qatar Sheik Hamad bin Khalifa Al Thani is taking a firsthand look at Qatari-sponsored reconstruction projects that were launched following the July 2006 war.

Emir Hamad traveled by helicopter on Saturday with President Michel Suleiman to the area, which borders Israel. They were met there by Prime Minister Saad Hariri, and Speaker Nabih Berri .

Hezbollah commanders and officials including MP Mohammad Raad head of the party’s parliamentary bloc were at hand to welcome the emir.