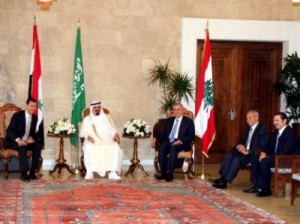 In a statement following the historic summit in Lebanon between Syrian President Bashar al-Assad , Saudi King Abdullah bin Abdel Aziz and Lebanese president Michel Suleiman the leaders urged Lebanese parties to avoid resorting to violence in the face of mounting political tension in the country.

“The leaders stressed the importance of stability… the commitment of the Lebanese not to resort to violence and the need to place the country’s interests above all sectarian interests,” the statement that was released by the presidential office added.

The statement also voiced the importance of “resorting to legal institutions and Lebanon’s unity government to resolve any differences.”

Assad gave a thumbs up after the talks and said, “The discussions were excellent.”

The purpose of the visit by the Syrian president and Saudi monarch was to defuse the tension over reports of the Special Tribunal for Lebanon’s (STL) impending indictment against members of Hezbollah for the 2005 assassination of former Prime Minister Rafik Hariri.