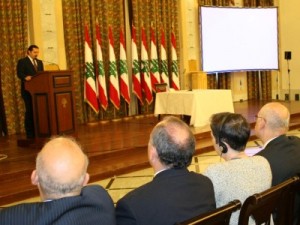 Lebanon Prime Minister Saad Hariri called on Tuesday during a conference at the Grand Serail on improving management and fighting corruption on relevant parliamentary commissions to quickly approve law proposals on the issue.

He said that   political disputes in Lebanon have seriously impacted the ability of the Lebanese institutions to monitor state accountability.

“The goal is to enhance the public sector to ensure better services for the Lebanese,” Hariri added.

In an interview with Al-Arabiya TV, Hariri said Thursday that the joint visit of Saudi King Abdullah bin Abdul Aziz al-Saud and Syrian President Bashar al-Assad to Lebanon Friday “brings considerable stability to the country after the regional tensions.”

He added that this visit comes within the framework of strengthening the initiative launched by King Abdullah during Kuwait’s economic summit.

He added that “King Abdullah bin Abdul Aziz launched an initiative for Arab reconciliations and he is visiting the Arab countries.”