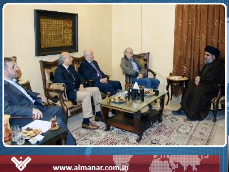 Present at the meeting was Wafiq Safa , Hezbollah’s security coordinator with PSP.

Jumblatt stressed during talks Tuesday the importance of coordination between the two parties,the Hezbollah statement said.

Discussions have reportedly focused on Palestinian rights, spy networks and latest developments over the Special Tribunal for Lebanon (STL) and the expected findings of Prosecutor Daniel Bellemare.

Nasrallah also claimed that the telecom sector is being used by STL for issuing indictments.

According to As Safir report that was published Tuesday STL may indict in two rounds 23 to 25 Hezbollah members between September and the end of the year.

Lebanon has arrested three suspects over the past month in an expanding probe into an alleged network of Israeli spies employed in the country’s telecom sector.