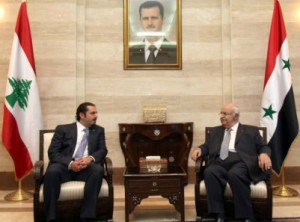 Lebanese Prime Minister Saad Hariri is in Damascus, Syria for a two-day visit accompanied by a delegation of 13 ministers for talks and finalization of several agreements.

The discussions were described as “foundational” talks for Lebanese-Syrian relations.

Hariri first met with his Syrian counterpart Mohammed Naji Otary, who welcomed him upon arrival. During their meeting they signed 17 agreements and memorandums of understanding , and protocols covering a range of fields such as economy, trade, education, agriculture, tourism among others.

Hariri and Otary discussed cooperation and fraternal ties between the two states and the joint desire to develop and expand them in a way that would live up to the Lebanese and Syrian people’s expectations, according to Syrian official news agency SANA

The two sides also pledged to bolster Lebanese-Syrian ties within the framework of the Treaty of Brotherhood, Cooperation and Coordination between the two countries in the economic, political, and developmental fields among others.

Hariri and Otary also stressed the need to revive the work of the Higher Lebanese-Syrian Council and coordinate activity and positions on the foreign policy level.

Meanwhile, a meeting for the Follow-up and Coordination Board headed by the two prime ministers took place at the Syrian governmental building to discuss its meetings that were held on June 12 and the recommendations that were presented by both sides over modifying and developing existing agreements between the two countries.

Otary was reported as saying that there are high expectations from Hariri’s visit that is aimed at “restoring warmth between the two nations”.

Hariri and Otary then headed to to meet with President Bashar al-Assad According to the most recent reports the PM will remain in Syria till Monday while his accompanying delegation will return to Beirut today. 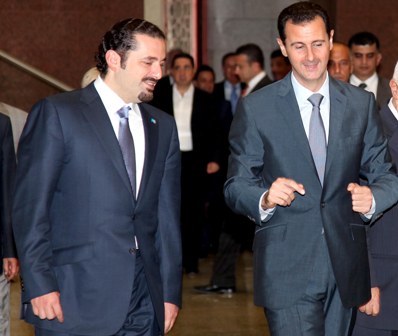