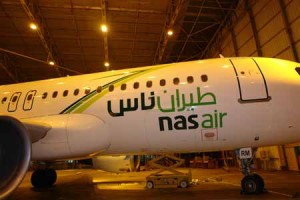 Human remains were found on the tire of a Saudi-owned Nas Air jet when it landed in Riyadh after a flight from Beirut on Saturday, a Lebanon airport official said, adding that a man had apparently tried to hitch a ride on the aircraft’s landing gear.

“A man who has not yet been identified somehow managed to grab hold of a (wheel) of the jet in Beirut without the control tower noticing before takeoff,” the official told AFP.

Nas Air Flight XY 720 took off from Beirut airport late Friday and landed Saturday morning in the Saudi capital Riyadh, where the remains were found during maintenance operations, the official said, speaking on condition of anonymity as he was not authorized to talk to the media.

Lebanon’s state-run National News Agency (NNA) said passengers on the plane reported seeing a man in a baseball cap with a backpack make a dash for plane as it prepared to taxi. He stumbled once and then continued towards the plane.

“The passengers and flight attendants informed the pilot, but he did not take any action and continued takeoff without informing the Beirut control tower” that anything was amiss, according to the NNA.

A Nas Airline official in Riyadh said they were waiting for an official report on the incident from the Saudi General Authority of Civil Aviation before commenting or providing any details.

According to NNA, a routine maintenance check of the plane in Beirut did not detect anything out of the normal. Security at Beirut’s Rafik Hariri International Airport launched an investigation into the incident. The Australian