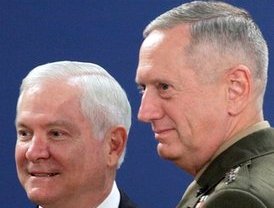 President Obama’s pick to lead military operations in Afghanistan, Iraq, Pakistan and the Middle East is an experienced ground combat commander, but also earned a stern rebuke in 2005 for controversial comments about combat operations.

Marine Corps Gen. James Mattis, then a lieutenant general, told a crowd in San Diego that it was “fun to shoot some people” and said that some Afghans deserved to die.

“You go into Afghanistan, you got guys who slap women around for five years, because they didn’t wear a veil,” Mattis said. “You know guys like that ain’t got no manhood left anyway. So it’s a hell of a lot of fun to shoot ’em.” (Watch Mattis’s comments on the following video )

Then-Marine Corps Commandant Michael W. Hagee told Mattis to choose his words “more carefully,” but also praised him as “one of the country’s bravest and most experienced military leaders.”

“While I understand that some people may take issue with the comments made by him, I also know he intended to reflect the unfortunate and harsh realities of war,” Hagee said. “Mattis often speaks with a great deal of candor. I have counseled him concerning his remarks, and he agrees he should have chosen his words more carefully.”

Military ethicists warned that Mattis’s comments had the potential to cause violent events committed either by U.S. military service members or against American troops.

On Thursday Defense Secretary Robert Gates told reporters that appropriate action was taken against Mattis in 2005.

“Obviously in the wake of the Rolling Stone interview [with Gen. Stanley McChrystal], we discussed this kind of thing,” Gates said. “And I have every confidence that — that General Mattis will be — will respond to questions and speak publicly about the matters for which he is responsible in an entirely appropriate way.”