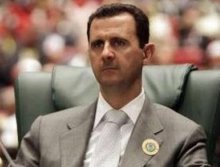 Staying in power for a decade is no achievement in the Middle East, where authoritarian rule keeps leaders going for a lifetime. In the case of Syria’s Bashar al-Assad, however, even a shorter tenure was never guaranteed.

When he inherited the presidency after the death of his father, Mr Assad was an insecure 34-year-old eye doctor, surrounded by an old guard unconvinced of his legitimacy.

This weekend he marks the 10th anniversary of his takeover with the reassurance that he has consolidated his power and pushed aside his internal enemies (including one who defected and another who committed “suicide”).

The outside threats that made his regime shudder in his first years have also dissipated.

When the US invaded Iraq in 2003, Syria was convinced that it would be next in line. More menacing was the Lebanon crisis that followed two years later. Mr Assad was forced to end Syria’s nearly 30-year dominance over its neighbour after the killing of Rafiq Hariri, a former prime minister and Syrian foe. Amid a popular uprising in Lebanon and international uproar, a UN investigation was set up with early indications that Damascus was behind the killings.

The follies of the US, however, eventually worked in Mr Assad’s favour, as the occupation of Iraq descended into chaos. European leaders, meanwhile, realised the futility of isolating Syria. In fact, the more pressure was exerted, the more Damascus sought refuge in a spoiler role, stirring trouble in Iraq and Lebanon, and getting closer to its ally Iran.

By the time Barack Obama took over, the US had figured out talking to Syria was worth a try.

Syria’s fortunes also turned round in Lebanon. The UN investigation has yet to produce indictments and thanks to the strength of its allies, led by militant Hizbollah, Damascus has restored some of its lost influence over Beirut.

To be sure, no one, least of all Syria, should feel too comfortable in today’s Middle East, where the twin crises of Iran’s nuclear programme and the Arab-Israeli conflict threaten regional conflagrations.

Just consider the recent Israeli allegations about Syrian transfers of Scud missiles to Hizbollah. Denied by Damascus, the reports heightened speculation of a new conflict between Lebanon and Israel. The safer environment that Mr Assad faces removes an main excuse for inaction on the domestic front. “He has emerged unscathed from very difficult circumstances,” says Jon Alterman, Middle East director at the Centre for Strategic and International Studies.

Mr Assad has indeed changed the faces in the regime but not its methods or its structure.

True, the president and his glamorous wife, Asma, project the image of a modern couple. And Damascus has developed a more cosmopolitan feel, with new construction, restaurants and smart boutique hotels. Limited economic liberalisation, meanwhile, has opened up the socialist economy to private banking and eased foreign exchange controls. But fundamental barriers to investment – corruption, inefficiency and the heavy hand of the state – remain.

“The business environment is off-putting for many significant investors,” says Peter Harling of the International Crisis Group, a think-tank. “But the expectations of society are higher in as much as Syria achieved some success on the foreign policy front, so the argument saying not much can be done to improve living standards because of outside pressure doesn’t work quite as well.”

The consolidation of Mr Assad’s rule also has not translated into a greater willingness to tolerate opposition. Only last week, Haitham Maleh, a 78-year-old human rights lawyer, was jailed for three years for “weakening national morale”.

“There’s always been a question about whether Assad is a true reformer hampered by an old guard or he only talked reform at first to gain some legitimacy,” says Nadim Houry of Human Rights Watch. “The record after 10 years is that he’s not truly committed to internal reform.”