Tourism minister: Lebanon will witness the best tourist season ever 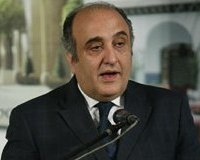 Lebanese Minister of Tourism Fadi Abboud said Lebanon will witness the best tourist season in its history this year as the number of tourists and expatriates have visited the country this year has reached 1.1 million and hotel bookings are at an all time high.

Aboud added that occupancy at the Beirut hotels is around 90%, stressing that investment in the Lebanese tourism sector has reached 4 billion dollars this year and that 1200 rooms are now being built in Beirut.

During an interview with Kuwaiti newspaper An Nahar Aboud , he stressed that the security situation in Lebanon is better than anywhere in the world . He brushed aside Israeli threats saying” we are used to their old song at the beginning of each summer. ”