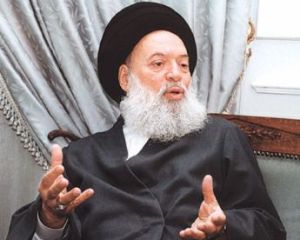 Lebanon’s Grand Ayatollah Mohammed Hussein Fadlallah, one of Shiite Islam’s main religious figures who had a strong following world over, died Sunday after a long illness. He was 75.

Fadlallah, known for his staunch anti-American stance, helped in the rise of Lebanon’s Shiite community in the past decades. He was one of the founders of Iraqi Prime Minister Nouri al-Maliki’s governing Dawa Party and was believed to be its religious guide until the last days of his life.

He was described in the 1980s as a spiritual leader of the Lebanese militant Hezbollah — a claim both he and the group denied.

Fadlallah was born in Iraq in 1935 and lived in the Shiite holy city of Najaf, where he was considered among the top clergymen, until the age of 30.

His family hailed from the southern Lebanese village of Ainata and he later moved to Lebanon, where he started lecturing on religion and prodded Shiites, who today make up a third of Lebanon’s population of four million, to fight for their rights in the 1970s and 80s.

During Lebanon’s 1975-90 civil war, he was linked to Iranian-backed Shiite militants who kidnapped Americans and other Westerners, and bombed the U.S. Embassy and Marine base in Lebanon, killing more than 260 Americans.

Although he adamantly denied involvement in those events, he contended such acts were justifiable when the door is closed to dialogue. “When one fires a bullet at you, you cannot offer him roses,” he had said.

Fadlallah later lost much of his 1980s militancy — his sermons, once fiery diatribes denouncing American imperialism, took on a pragmatic tone.

Because of the his ties to the militants, then-President Bill Clinton in Jan. 1995 froze Fadlallah’s assets in America, along with those of 17 other people as part of an anti-terror campaign.

The stocky, gray-bearded cleric with piercing brown eyes below his black turban, rejected being described in Western media as Hezbollah’s mentor. He claimed his relationship with the group was the same as with any other Shiite faction but that it simply was more obvious because of his physical presence in Lebanon.

“I reject it not because I reject Hezbollah, but because I refuse to be given a title that I don’t possess,” he said.

Fadlallah escaped several assassination attempts, including a March 1985 car bomb near his home in the Bir el-Abed district of south Beirut that killed 80 people.

The bomb, planted between his apartment block and a nearby mosque Fadlallah was attending that day, was timed to go off as he passed by. But Fadlallah stopped to listen to an old woman’s complaints and escaped the 440 pound (200 kilograms) explosives’ blast.

Fadlallah long advocated boycotting American and Israeli products. Yet, despite being a harsh critic of U.S. policy, he condemned the Sept. 11 attacks in the United States as acts of terror.

During the 2006 Israel-Hezbollah war, Israeli warplanes bombed his two-story house in Beirut’s southern Haret Hreik neighborhood. Fadlallah was not at home at the time of the bombing, which reduced the house to rubble.

Announcing Fadlallah’s death at a Beirut news conference, Bahraini Shiite cleric Abdullah al-Ghuraifi, described him as a “father, religious authority and spiritual leader to all Islamic movements in the Arab and Islamic world.”

Outside the hospital and at the Al-Hassanayn mosque in Beirut’s suburb of Haret Hreik, where Fadlallah gave religion lessons and Friday sermons, black banners were hung up in a sign of mourning. Thousands of Fadlallah’s supporters, including women, wept openly. Fadlallah’s Al-Bashaer radio station and Hezbollah’s Al-Manar TV started broadcasting Quranic verses.

For long, the cleric suffered from diabetes and high blood pressure. He was in hospital for the past two weeks but his condition deteriorated on Friday when complications from a liver problem led to an internal hemorrhage. One of his doctors, Hashem Noureddine, told The Associated Press he died from stomach bleeding.

“This is a dark day,” said Mahmoud Malak, 44, a civil servant. “I don’t think anyone will be able to fill the vacuum he will leave behind.”

A grandfatherly figure, Fadlallah was also known for his bold fatwas, or religious edicts — including one that gave women the right to hit back their husbands if they attacked them. He issued an edict banning smoking and another saying the Baghdad government has no right to “legitimize” the presence of foreign troops but should call for an imminent and unconditional withdrawal of U.S. forces from Iraq.

He supported the Islamic Revolution in Iran in 1979 but distanced himself from the key principle advocated by its leader Ayatollah Ruhollah Khomeini, which placed the Iranian cleric as a supreme, undisputed spiritual leader for the world’s Shiites.

Among his followers are many of Iraq’s Shiite leaders, including al-Maliki.

In Iraq, a prominent leader in al-Maliki’s Dawa Party, Ali al-Adeeb, said Fadlallah’s death was a major loss to the Islamic world and that it “will be hard to replace him.” Lebanon’s Prime Minister Saad Hariri called him “a voice of moderation and an advocate of unity” among Lebanese and Muslims in general.

Fadlallah’s title was “sayyed” — reflecting a claim of direct descent from the Prophet Muhammad’s daughter Fatima and her husband Imam Ali, revered by Shiites as a saint.

In his youth, Fadlallah studied theology in Iraq under prominent scholars. He also worked closely with Mohammed Baqir al-Sadr, a co-founder of the Dawa Party that Saddam Hussein later crushed. In Lebanon, he founded the “Family of Brotherhood” charity and his Al-Mabarrat network of charities, orphanages, schools, and religious institutions in Beirut, south Lebanon and the eastern Bekaa Valley, where many Shiites live.

Fadlallah’s is survived by his wife Najat Noureddin and 11 children. His eldest son followed in his footsteps as a Muslim scholar.

Funeral arrangements were not immediately decided.AP