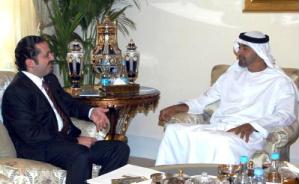 WAM reported that “Hariri and Nahayan discussed the current Middle East and international developments as well as Lebanon and UAE’s positions (towards these developments ). They also discussed the efforts being exerted to realize peace in the region, stressing that there is no peace nor security without reaching just permanent solution to the Palestinian issue based on the agreed international peace efforts, especially the 2002 Arab Peace Initiative.”

The meeting also reportedly tackled bolstering the brotherly relations between the UAE and Lebanon and helping the Lebanese people in dealing with the challenges that hamper development, security and stability in Lebanon. Sheikh Mohammed voiced his support for the Lebanese government and people under Al Hariri.