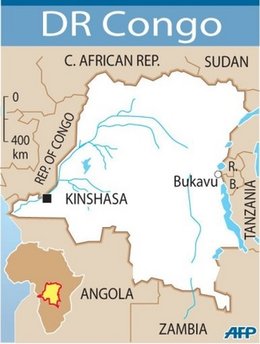 At least 230 people were killed and 190 injured when an oil tanker flipped over and exploded in the Democratic Republic of Congo, a government spokesman said Saturday.

While the spokesman, Mende Omalanga, said five of the dead were United Nations peacekeepers, an official with the U.N. mission in the capital of Kinshasa contradicted the report.

“No U.N. members were killed” in the explosion, said Madnodje Mounoubai.

The tanker flipped over Friday afternoon, said Omalanga, the country’s minister of communications. It was attempting to overtake a bus in Sange, in South Kivu province, on the country’s eastern border,

When oil began to spill from the overturned tanker, local residents attempted to collect the oil. One was smoking a cigarette, causing the tanker to explode, Omalanga said.

The largest group of victims had been sitting in a bar near the accident site watching the World Cup match between the Netherlands and Brazil, he said.

Some of the injured were being treated locally in surrounding villages, but most were sent to the nearby town of Uvira, Omalanga said.

The tanker is owned by a company called GINKI, and the driver managed to escape the fire, the U.N. mission said.

Photo: A fuel truck exploded and set fire to a village in eastern Democratic Republic of Congo, killing at least 230 people and injuring 170, the Red Cross has said