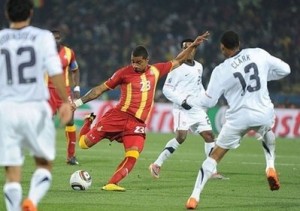 Life on the edge came to an exhausting and disappointing end for the United States against a familiar foe.

Ghana sent the US packing from the World Cup – again – eliminating the Americans in the second round Saturday night.

Asamoah Gyan scored 3 minutes into overtime, leading the Black Stars to a 2-1 victory that ended a thrilling but ultimately unfulfilling World Cup for the United States that was watched by record audiences back home

“A stinging, tough defeat,” US coach Bob Bradley said. “We knew Ghana was a good team and we didn’t get the job done.”

Asamoah Gyan scored 3 minutes into overtime to win it.

Kevin Prince Boateng put Ghana ahead when he stripped the ball from Ricardo Clark in the 5th minute and beat goalkeeper Tim Howard from 16 yards.

Once again, the US came back, and Landon Donovan tied the score with a penalty kick in the 62nd minute after Jonathan Mensah pulled down Clint Dempsey streaking in. But no matter how much the Americans pressured after Gyan scored, they couldn’t tie it again.

“We had already expended a lot of energy at that time,” Bradley said. “I think we put ourselves in trouble with giving up the early goal again.”

In the first-ever extra time World Cup game for the US, Gyan got the winning goal when he took a long ball from Andre Ayew over the defence and beat US captain Carlos Bocanegra, his teammate on the French club Rennes. Gyan let the ball bounce, took a touch with his chest, and with Jay DeMerit vainly trying to catch up, scored over goalkeeper Tim Howard with a left-footed shot from 16 yards.

“We’ve made everybody proud,” Gyan said. “Not Ghana alone, but all of Africa.”

There was no late magic this time to equal Donovan’s injury-time goal against Algeria that moved the Americans into the second round. The closest the US came to tying it again was in the 98th minute, when Maurice Edu’s header off Donovan’s corner kick went wide.

With Howard pushed up, DeMerit’s desperation long shot in the final minutes went over the crossbar. Then Dempsey sent a header wide.

At the final whistle, Howard consoled Bocanegra and Maurice Edu collapsed to the ground. Donovan exchanged jerseys with a Ghana player and walked off the field, put on a coat, sat on the bunch and hung his head.

“This is a terrific group and we’re proud,” Bradley said. “We’re also disappointed that we couldn’t take it further.”

Ghana, the only African team left in the tournament, celebrated moving into the quarterfinals against Uruguay on Friday in Johannesburg. In their second World Cup appearance, the Black Stars bettered their 2006 team, which lost to Brazil 3-0 in the second round. That teams beat the Americans 2-1 in the final game of the opening round to send the US home.

While the US came from behind to draw England 1-1 and Slovenia 2-2 in the first round, the Americans looked ragged the time. They go home pondering a World Cup that could have been so much more. They thrilled the large number of American who were the largest group of overseas ticket buyers, but failed to do as well as the 2002 team, which reached the quarterfinals in the best US finish since 1930.

The defence allowed the first goal in three of four games, and the Americans kept up their record of never coming from behind to win in 29 World Cup matches.

With Donovan, Dempsey and Howard in the primes of their careers, the US had high expectations coming off a first-round exit four years ago. Because a growing fan base watched on television in record numbers, the loss was even more stinging for a team still struggling for recognition both in the soccer world and among sports fans in America.

“Soccer can be a cruel game,” Donovan said. “Sometimes you’re at the top and sometimes you are at the bottom of the mountain.”

Ghana’s only two goals in the first round had been penalty kicks by Gyan, but Boateng, whose half-brother plays for Germany, quickly put the Black Stars ahead from the run of play. After stealing the ball from Clark at midfield, he sprinted in on DeMerit, cut to the outside and turned the defender around as Clark chased in vain.

Clark, who hadn’t played since the opener against England, was replaced by Maurice Edu in the 31st minute.

The best US chance of the first half came in the 35th minute. Michael Bradley, the coach’s son, intercepted a pass and Robbie Findley, back from a one-game suspension, had an open shot. But goalkeeper Richard Kingson got his left hand on the shot.

Benny Feilhaber replaced the ineffective Findley at the start of the second half, with Dempsey moving up to forward. Feilhaber immediately had a chance when Jozy Altidore tipped the ball to him, but a sliding Kingson got a hand on it.

The US had conceded six straight penalty kicks since John Souza converted against Chile in 1950 before Mensah took out Dempsey’s leg.

Donovan kneeled down behind the ball in concentration, then clanked it in off the far post for his American record 45th international goal. With his third goal of the tournament and fifth in World Cup play, he surpassed Bert Partenaude (1930) as the American career leader.

Herculez Gomez replaced Altidore at the start of overtime as Bob Bradley used his last substitution for fresh legs on offense.

Former President Bill Clinton, who watched Donovan’s goal against Algeria lift the US to a 1-0 win and into the knockout phase on Wednesday night, stayed around and watched from the VIP area once again. This time he wore a blue US team warm-up jacket, and Mick Jagger of the Rolling Stones sat next to him.

The early Ghana goal quieted American fans, some in red, white and blue wigs and Uncle Sam hats. One even a brought a life-size cut-out of President Barack Obama, who called the team to congratulate players after the Algeria win.

Photo: Ghana’s striker Kevin-Prince Boateng (C) shoots the ball against the USA during their 2010 World Cup round of 16 football match at Royal Bafokeng stadium in Rustenburg. Ghana reached the World Cup quarter-finals for the first time by beating the United States 2-1 after extra time.