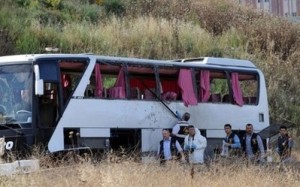 Another 12 people were wounded in the blast today in Istanbul’s Halkali district, the state-owned Anatolia news agency said. CNN Turk said two of the injured soldiers later died in hospital, bringing the toll to six. There was no claim of responsibility for the attack, which bore the hallmarks of the Kurdistan Workers’ Party or PKK, Istanbul Governor Huseyin Avni Mutlu said in televised comments to reporters from the scene of the attack.

The deaths are the first in a bomb attack in Istanbul, Turkey’s largest city, since July 2008, when Kurdish rebels killed 17 people on a busy shopping street. They come as fighting intensifies in the largely Kurdish southeast between Turkey’s army and the PKK, which has been seeking autonomy in the region for more than two decades, in a conflict that has left about 40,000 people dead, mostly Kurds.

Turkish troops killed three Kurdish militants in the southeastern town of Gumushane today, NTV television reported, and another five militants and one soldier died in fighting in Diyarbakir last night. A PKK attack on Turkish troops in the Semdinli region near the Iraqi border on June 19 killed 11 soldiers.

Addressing lawmakers in parliament today, Prime Minister Recep Tayyip Erdogan rejected calls from opposition parties for the reimposition of the state of emergency in the southeast that was lifted in 2002 after 15 years.

“We will not surrender to this violence,” he said. Emergency rule “victimizes people, it strengthens terror.”

Turkey is calling on the U.S. to provide more intelligence about Kurdish militant activities in northern Iraq. The U.S. is “ready to review urgently” any request for help, U.S. Ambassador James Jeffrey said in an e-mailed statement yesterday.

Turkey has also warned Iraqi Kurdish leader Massoud Barzani to take control of the border to keep the rebels from crossing into Turkey from their camps in northern Iraq. Turkish troops have entered Iraqi territory to pursue militants in recent weeks, and the army says it will continue to do so if Iraqi officials don’t act to stop the attacks.

The attacks mark the latest setback for Erdogan’s efforts to ease tensions in the southeast by broadening cultural rights and boosting the economy.

His so-called “Kurdish opening” includes the launch of a state-run Kurdish language television channel last year as well as measures to improve irrigation and encourage investment in the region, one of Turkey’s poorest.

The project has come under attack from opposition parties who say it is divisive and amounts to capitulation to terrorism. The PKK, and legal pro-Kurdish parties, say the measures haven’t gone far enough.

Erdogan told lawmakers in parliament today that he won’t abandon the plan.

“Whenever democracy is increased, whenever there is economic development, the terror organization intervenes,” he said. “Unfortunately, in the past, when this happened, governments have taken steps back. We will not take a step back.”

The PKK, labeled a terrorist organization by the U.S. and the European Union, has been fighting for autonomy in the southeast since 1984.

The benchmark ISE National 100 Index of stocks fell 1.2 percent at 12:30 p.m. in Istanbul, tracking declines on most European markets.

Photo: Policemen inspect the wreckage of a military bus in Istanbul. A roadside bomb blew up a bus carrying military families in Istanbul, killing four soldiers and a girl, as Kurdish rebels stepped up their separatist attacks