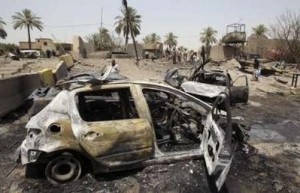 The blasts wounded 53 people at one of the public sector’s most active financial institutions, which is at the forefront of efforts to encourage foreign investment in Iraq as the sectarian violence that followed the 2003 U.S.-led invasion fades.

They underscored fears of increasing violence as militants try to exploit the political vacuum that followed the March 7 election which produced no outright winner.

Baghdad security spokesman Major General Qassim al-Moussawi said two cars packed with around 80 kilograms of explosives each were driven at the main gates of the Trade Bank of Iraq and detonated on striking blastwalls protecting the building.

He put the initial death toll at 18, but an Interior Ministry source said later it had risen to 26.

The building was badly damaged and several bank guards were killed. A bank employee who asked not to be identified said the damage and death toll would have been worse had the bank’s guards not protected it and its windows not consisted of shatterproof glass.

At least two of the dead were police officers guarding a nearby Interior Ministry office that issues Iraqi identity cards, ministry sources said.

“I feel so sorry for what is happening to my country,” said Mahmoud Asi, who was wounded along with his wife in the blast near his home. Blood stained his clothes. “All the bank’s guards were killed,” he said.

Security officials blamed the June 13 central bank attack on Sunni Islamist insurgents linked to al Qaeda, saying they were trying to prove they remained potent after suffering significant blows this year, including the killing of their Iraq leaders.

There was no immediate claim of responsibility for Sunday’s attack on the Trade Bank of Iraq, but suicide bombings are a hallmark of al Qaeda and other Sunni Islamist groups.

Overall violence has dropped sharply since the all-out sectarian warfare of 2006-07, but tensions have been rising since the March election, which has yet to yield a government.

The political uncertainty threatens to muddy U.S. intentions to end combat operations in August ahead of a full U.S. withdrawal by the end of 2011.

While there was no outright winner of the March 7 election, a merger of the country’s main Shi’ite-led coalitions in the new parliament is expected to squeeze out the vote leader, a cross-sectarian alliance heavily backed by minority Sunnis, in the competition to form a government.