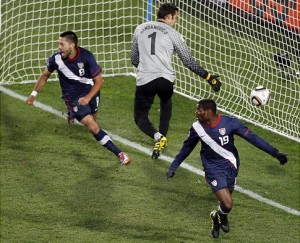 The United States staged the greatest rally in its World Cup history Thursday, overcoming a two-goal halftime deficit to record a 2-2 draw with Slovenia at Ellis Park.

Michael Bradley’s goal in the 82nd minute tied the game, giving his father, coach Bob Bradley, an early Father’s Day present and the never-say-die Americans a fighting chance to reach the second round of South Africa 2010.

The Americans (0-0-2, two points) will face a must-win situation against Algeria on June 23. Slovenia is 1-1-0 with four points. It also marked the second consecutive game in which the U.S. came back from a deficit, managing to pull out a 1-1 tie with England last Saturday.

A long ball into the penalty area found the head of former Red Bulls forward Jozy Altidore. The ball bounced once as many of the 45,573 spectators erupted in celebration.

It appeared the Americans had pulled ahead in the 84th minute on a Maurice Edu goal off a Landon Donovan free kick, but referee Koman Colibaly apparently called a foul before Edu got the ball.

“I still don’t know why the goal was disallowed,” Bob Bradley said after the match.

The U.S. still has never beaten an Eastern or Central European at the World Cup at 0-8-2.

As the smallest country in the competition, Slovenia (two million population) was trying to bring home the scalp of the nation with the largest population – 310 million.

Central defender Oguchi Onyewu wound up in the middle of both Slovenian goals in the first half in the worst way possible.

He gave Birsa all sorts of room on his 25-yard rocket past goalkeeper Tim Howard in the 13th minute and allowed Ljubijankic to slip by him to score from eight yards in the 42nd minute.

As Birsa took his shot, Onyewu appeared to duck, allowing the ball to head toward the net. There was nothing Howard could do except pick it out of the back of the net.

On the second goal, Gooch could not keep up with Ljubijankic, who latched onto a pass from Milvoje Novakovic before beating Howard for a two-goal advantage.

On the other end of the pitch, Slovenia keeper Samir Handanovic was sharp, punching out a pair of free kicks from Landon Donovan and Jose Torres.

After a sub-par first half, U.S. coach Bob Bradley decided to make two subsitutions and a tactical change, bringing on midfielders Maurice Edu and Benny Feilhaber for Torres and Robbie Findley. Clint Dempsey moved to a forward spot.

The strategy paid off with a goal in the 48th minute with a little bit of luck. Right fullback Steve Cherundolo sent a long pass to Donovan down the flank. Defender Bostjan Cesar slipped and Donovan had a ton of room to motor down the right side before beating Handanovic with an emphatic shot to the roof of the goal to close the gap to 2-1.

It was Donovan’s third career World Cup goal and first in eight years since Korea/Japan 2002.

The U.S. had an opportunity to equalize in the 70 minute after Marko Suler was awarded a yellow card for hammering Altidore just outside the area. It appeared Suler was the last defender and could have received a red card.

Photo: Maurice Edu (r.) and Clint Dempsey react after the referee disallowed a goal by Edu late in the United States’ 2-2 draw with Slovenia at Ellis Park Stadium in Johannesburg