by yalibnan
662
Minister of Information Tarek Mitri emphasized the need to modernize the public sector in Lebanon during the opening of the DEA conference.
Share: 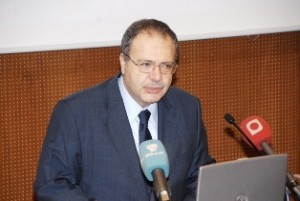 Minister of Information Tarek Mitri emphasized the need to modernize the public sector in Lebanon during the opening of the 8th international conference on Data Envelopment Analysis (DEA) held at the Olayan School of Business (OSB) of the American University of Beirut on June 10, 2010.

“We won’t be able to meet the modernization challenge unless there are greater synergies between the public sector, private sector, and the academic world,” said Mitri. “I trust that an initiative such as your own help in creating such synergies.”

Mitri, who was representing Prime Minister Saad Hariri, said that public services in Lebanon are still behind and as far as modernization goes “we have a lot to learn from the private sector and we have a lot to draw on the experience of people in the academic community.”

The conference, which was attended by high-level government officials, bankers, and academics from over 30 countries in the world, was organized by the Olayan Business School at AUB. It aimed at discussing the importance of applying DEA to performance management and measurement in both public and private sectors.

DEA is a nonparametric method in operations research and economics for the estimation of production frontiers. It is used to empirically measure productive efficiency of decision making units.

DEA was defined by Professor Ibrahim Osman as being “an ongoing management improvement process of the overall health of an organization unit by comparison to best practices of peer alternatives.”

Osman underlined the importance of DEA by saying that one cannot manage what one cannot measure. “Around 45 percent of people make decisions according to their feelings and hence, 67 percent of companies who are supposed to be more efficient than governments achieve only 60 percent of their goals,” he said. “I leave it to your imagination to assess how the government’s performance would be.”

Osman called upon Hariri and Mitri to establish a center in Lebanon specialized in decision making.

For his part, Rajev Banker, who is Merves Chair in Accounting and Technology at Fox School, explained that there are a wide range of resources that are required in order to produce what is desired by the various constituents of an organization. “This is done in the context of a wide range of external forces that impact organizations. The way you take all that into consideration at the same time is the challenge that DEA has been addressing over the past 30 years,” he said.

OSB Associate Dean Khalil Hindi praised AUB’s role in knowledge creation and knowledge transfer in addition to the university’s efforts in organizing such international conferences. “For us, this particular conference has additional significance, for we seek to provide a business education that is steeped in the disciplines and that emphasizes analytics,” he said. “What can better serve this purpose than a conference that introduces our students and faculty to an area of intellectual endeavor that is deeply rooted in the science of planning better, doing better, and evaluating better?” he asked.

Provost Ahmad Dallal also commended the conference saying: “It provides societies in the developing world … with the tools, methods, and knowledge needed to combine quality and productivity for progress.”

Dallal added that DEA is extremely relevant in today’s world. “I am confident that the participants in DEA 2010 will contribute to the enhancing of our understanding of the performance management techniques to establish better decision-making tools for resource allocation and to identify best work practices in addition to monitoring progress and measuring alignment with set goals and objectives.”

At the end of the opening, a gift of appreciation was offered by AUB professors to Mitri who received it on behalf of Hariri. AUB