An aid ship to sail from Lebanon to Gaza 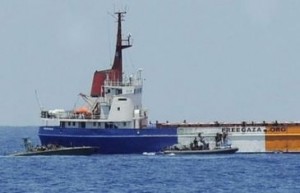 Despite Monday’s massacre by Israel aboard a Turkish aid vessel headed for Gaza in which nine Turkish peace activists were gunned down in cold blood and the seizure on Saturday of Gaza-bound Rachel Corrie ship and diverting it to the port of Ashdod, all aimed at breaking a three-year Israeli naval blockade of the Gaza Strip, more ships are being prepared sail by Free Gaza activists around the world.

On Saturday, two groups in Lebanon launched a campaign to raise funds to buy a ship that they hope can set sail from Lebanon for Gaza next week carrying educational supplies and journalists.

The non-governmental groups “Free Palestine Movement” and “Reporters Without Limits” said they hoped the boat would set off for the blockaded Gaza Strip at the end of next week.

The announcement of the ship from Lebanon came within less than twenty-four hours after the call of Hezbollah Secretary General Sayyed Hasan Nasrallah to increase the number of Freedom Flotillas to break the immoral, uncivilized and inhumane Israeli blockade of Gaza.

The organizers of Saturday’s sail of Rachel Corrie said they planned to dispatch as many as three more ships in coming months and that four captains already have volunteered for the missions.

“What Israel needs to understand is that nothing is accomplished with force,” said Greta Berlin of the Cyprus-based Free Gaza group, which sent the latest aid vessel, the Rachel Corrie.

Groups in Turkey are said to be planning a new aid flotilla in the autumn.

The activists on Rachel Corrie could not be reached on Saturday to describe the events because communication with the ship was cut during the operation.

The ship is named after US peace activist Rachel Corrie who was crushed to death by an Israeli bulldozer, accidentally says Israel, in Gaza in 2003.

Berlin called the takeover an outrage.

The 11 passengers and eight crew members will be deported, although those who object will be detained and given a chance to appeal, officials said.

Those aboard included Mairead Corrigan, who won the 1976 Nobel Peace Prize for her work with Catholics and Protestants in Northern Ireland, and the former U.N. humanitarian coordinator in Iraq, Denis Halliday.

The British government announced also on Saturday that it would award 19m in aid for refugees in Gaza.

The money, to be spent on healthcare, education and other services, will be announced by International Development Secretary Andrew Mitchell on Sunday.

Mr Mitchell said: ‘The humanitarian situation in Gaza is both unacceptable and unsustainable.’

‘There is an immediate need for unfettered access to Gaza if the humanitarian situation is to be improved, to allow the economy to get back on its feet, and to give the young people of Gaza the prospect of a better future,’ he added.

‘I call on the government of Israel to open the crossings to help end this humanitarian crisis.’

Photo: A picture released by the Israeli army shows Israeli navy troops boarding the Rachel Corrie aid ship in the Mediterranean sea before it was diverted to the military port of Ashdod in southern Israel. Thousands of people protested in London against the killing of nine activists by Israeli forces in this week’s botched aid fleet raid.