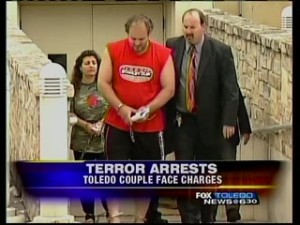 An Ohio couple were arrested Thursday on charges they conspired to help the Middle East terrorist organization Hezbollah, authorities said.

The U.S. Justice Department said Hor I. and Amera A. Akl, both 37, of Toledo, who hold dual U.S.-Lebanese citizenship, are accused of conspiring to provide material support to a designated foreign terrorist organization, conspiracy to launder money and arson relating to an insurance fraud scheme.

Hor Akl also is charged with two counts of bankruptcy fraud and one count of perjury, U.S. Attorney Steven M. Dettelbach said in a news release.

The Akls allegedly agreed to send money to Hezbollah after being approached by a confidential informant for the FBI who claimed he worked for an anonymous donor eager to support Hezbollah. The couple researched and proposed at least 10 different ways in which the money could be shipped to the terrorist group, authorities say.

The couple ultimately agreed to conceal about $500,000 in the hollow sections of a vehicle and ship it to Lebanon in return for a fee, authorities allege.

The charges of supporting a terrorist organization carry a maximum penalty of 15 years in prison, and money laundering charges carry a penalty of up to 20 years.