Iran threatens to make an enemy of Russia over sanctions 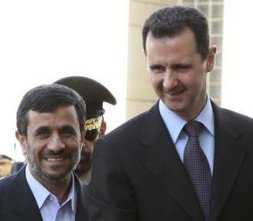 Iranian President, Mahmud Ahmadinejad, criticized Russia’s latest stance against his country, describing it as “unacceptable.” Addressing a massive crowd in the city of Kerman, Ahmadinejad called on the Russian government to reconsider its position so that the Iranian people will not add Russia to the list of Tehran’s historical enemies.

While Iranians are used to attacks by their political leaders against the US administration, they have not heard this tone of voice used against Russia. The Iranian president has sharply criticized the shift in Russia’s position toward Iran.

The US-led efforts to expand international sanctions on Iran are behind this tone of escalation, which has echoed in Iranian President, Mahmud Ahmadinejad’s address to the residents of Kerman Province.

Ahmadinejad said, “I tell Mr. Obama to abandon the policies of pervious US administrations. The Tehran Declaration brings a historical and major opportunity that must be seized upon, if justice is really what you want to achieve. I doubt that the Iranian people will give you another opportunity. If you don’t seize this opportunity, you must know that the Iranian nation will cut your road short.

Amidst this strong Iranian warning directed at Russia, some are betting on a breakthrough in the Iranian nuclear crisis, which had started to ease up after the Tehran Declaration reached with Turkey and Brazil. However, with the new threats of sanctions looming on Iran, a political solution may not come that easily. Leading powers have threatened Iran with a first, a second, a third, and now a fourth round of sanctions over its nuclear program and uranium enrichment.