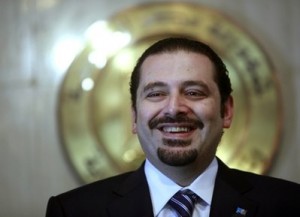 Ban has said that he would discuss with Hariri in detail the alleged transfer of arms to Hizbullah.

Fakih was crowned Miss USA May 16 after winning the pageant at the Planet Hollywood Resort & Casino on the Las Vegas Strip.

Hariri met in Washington Monday with U.S. President Barack Obama and hailed his efforts with the peace process in the region.

Hariri was the guest of honor Tuesday evening at the Rafik Hariri Building in Georgetown University.

Members of Hariri’s delegation and the diplomatic community as well as Ambassador of Lebanon Antoine Chedid, the Archbishop of Canterbury Dr. Rowan Williams and members of Congress and the U.S. Administration attended Hariri’s lecture.

“Lebanon taught me a lot and it continues to teach me that I have to be just like it,” Hariri told his listeners.